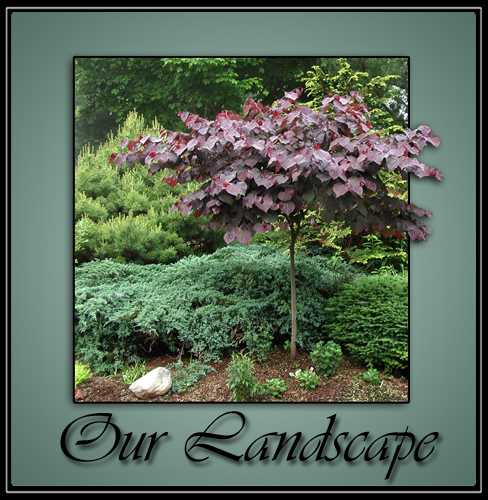 Our landscape changes every year with more planting, expanded borders and the development of our arboretum. We thought you might enjoy seeing the landscape from the beginning, the changes we've made through the years and some of our favorite plants 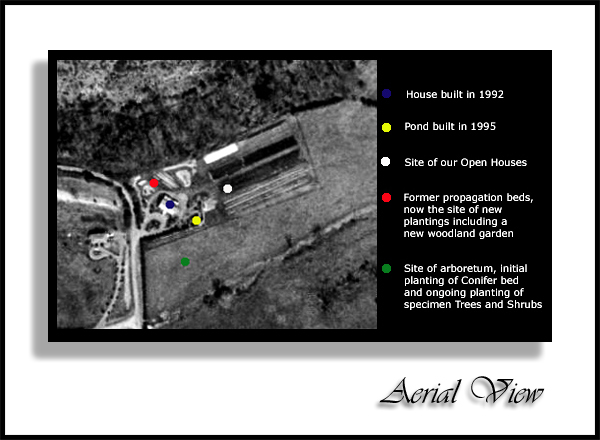 First, we thought we'd show you an aerial image taken a few years after the house was built.


Maybe a little confusing? We're hoping the colored dots which show you the different areas of the gardens will give you a better idea of where the gardens are located.


Now you have an idea of where the house is located on the property...let's continue with the tour! 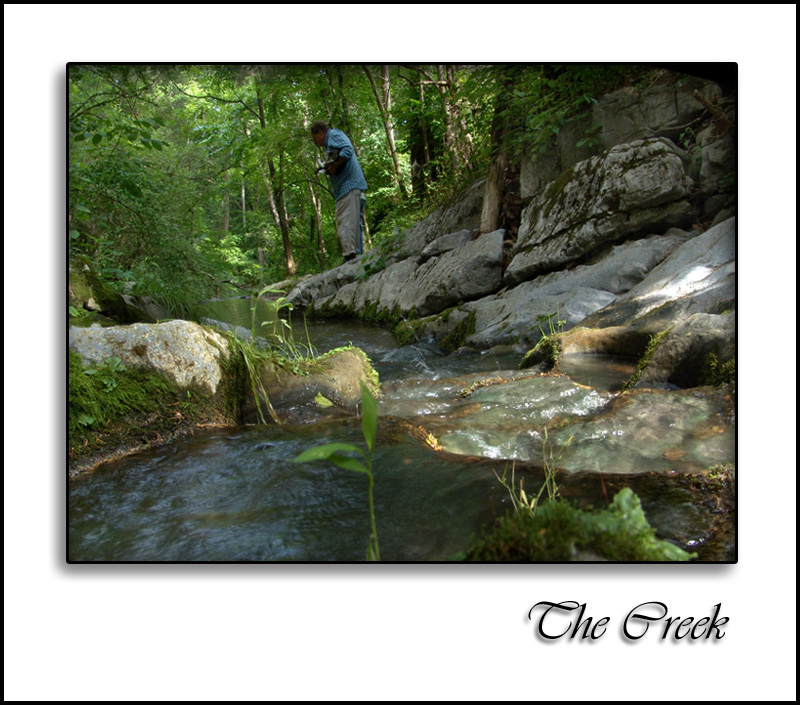 Although the house was built in an open field, we do have a wooded area with a very steep slope which drops down to the cool water of the stream which borders our property, Cold Run Creek. Unfortunately the woodlands aren't easily accessible but we do try to venture out in the spring when the Trilliums and Hepaticas are in bloom. The struggle to view them at their peak is worthwhile, but we do have to watch out for the poison ivy!

A friend from PA who was visiting a few years ago took this picture when we had an opportunity to relax by the stream one afternoon.
0 comments leave a comment 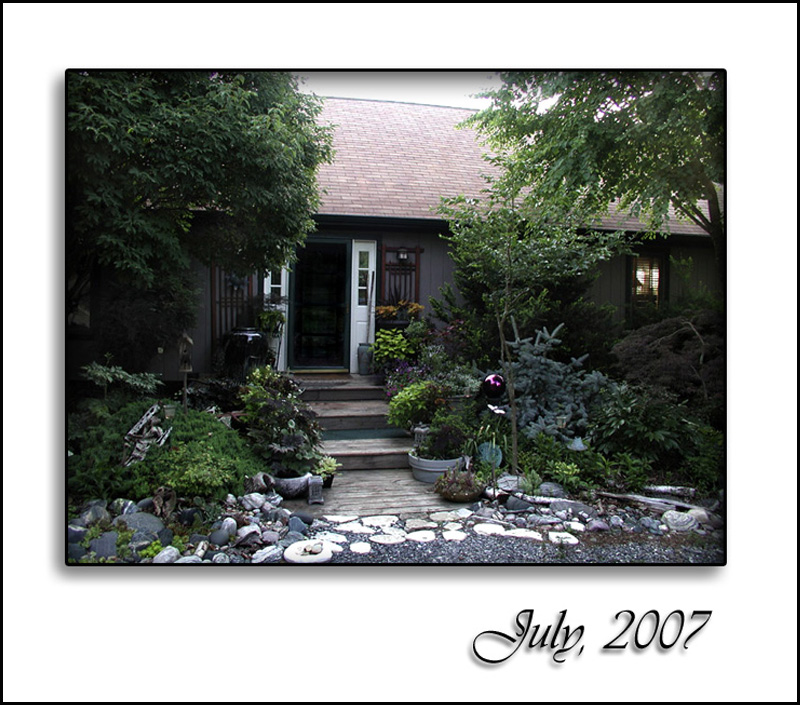 In just a few years there were major changes and by the summer of 2007, when viewed from the road, the trees and shrubs we've planted are finally providing some privacy AND shade!
But we're jumping ahead, we need to show you the changes and all our projects!
0 comments leave a comment 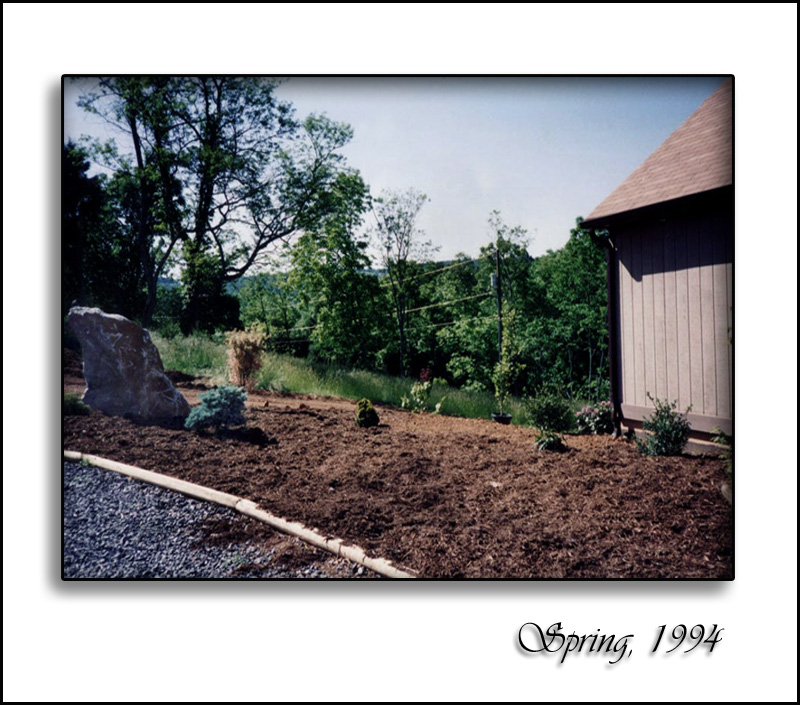 The site was prepared for the landscape in 1993 and by the spring of 1994 the planting had already begun. We have very few pictures of the initial planting but this one shows you the front border along the driveway and to the left of the front door.
Hollies were planted at the corner of the house with several conifers and a lovely (but young) variegated Japanese Maple (Acer palmatum 'Butterfly') shown behind the Colorado Spruce (Picea pungens f. glauca 'Fat Albert). Toward the back and still in its pot waiting for planting is European Hornbeam (Carpinus betulus 'Fastigiata')which will eventually block the view of the telephone pole from the driveway. 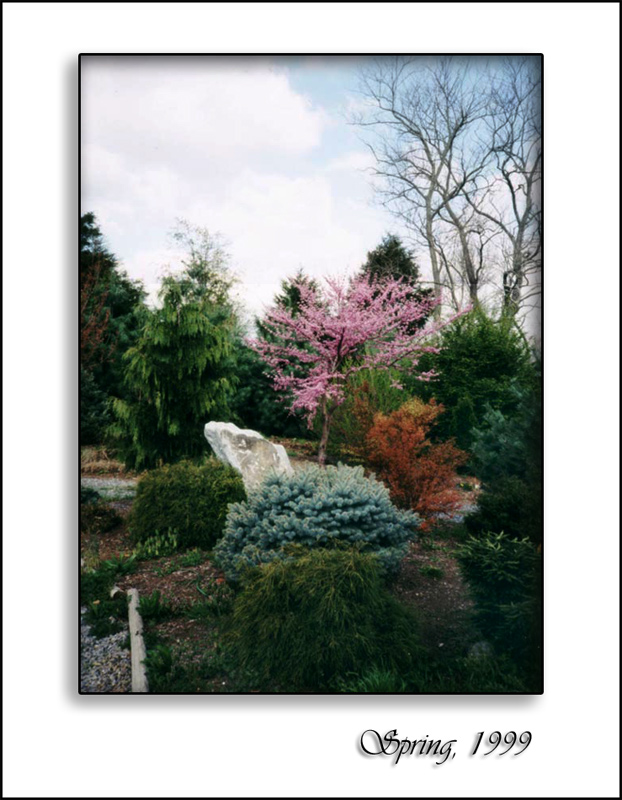 In the spring of 1999, just five years later and what a difference!

We've added a few more trees and shrubs and it's finally beginning to look more like a real landscape!

The pink flowering tree is a Redbud (Cercis canadensis 'Forest Pansy'), a beautiful tree in the spring but just as nice when the deep burgundy foliage appears after the flowers are gone.
0 comments leave a comment 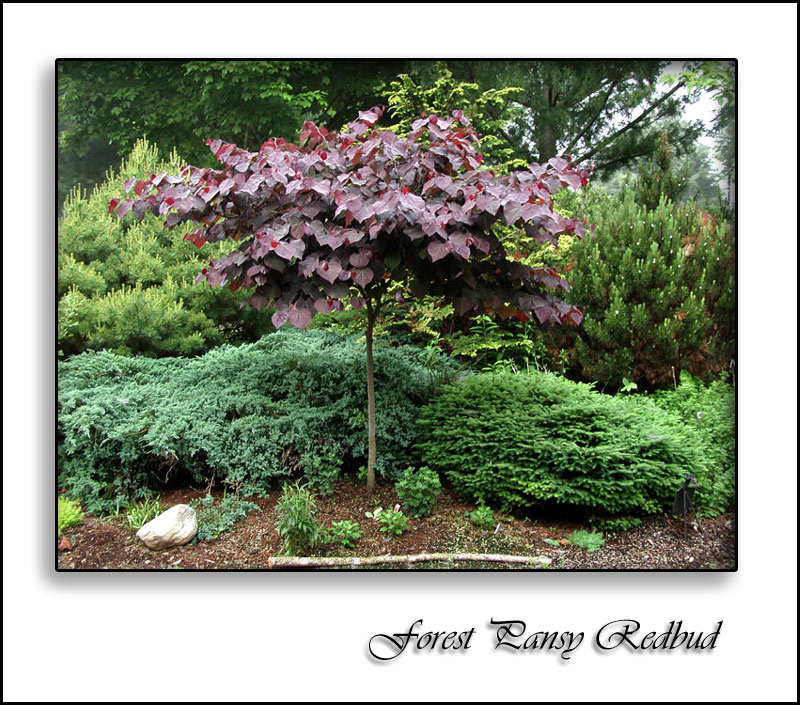 We really liked the Forest Pansy Redbud and decided to plant another in the island on the opposite side of the driveway. It's still a young tree but as it matures the arching canopy will provide shade
for our parked cars in the driveway.
0 comments leave a comment 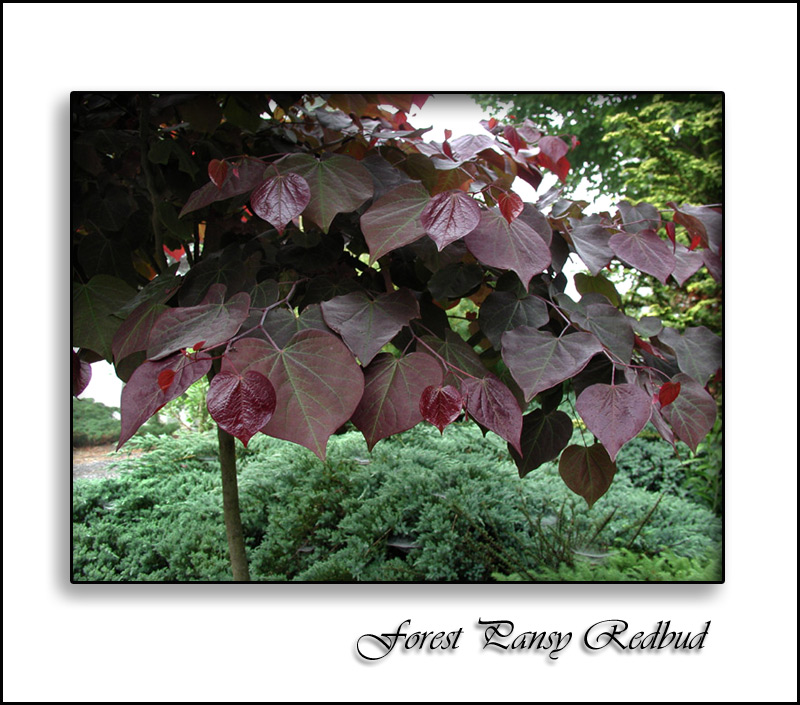 Although the deep burgundy color fades somewhat by mid summer, who can resist the beautiful foliage in the spring?
0 comments leave a comment 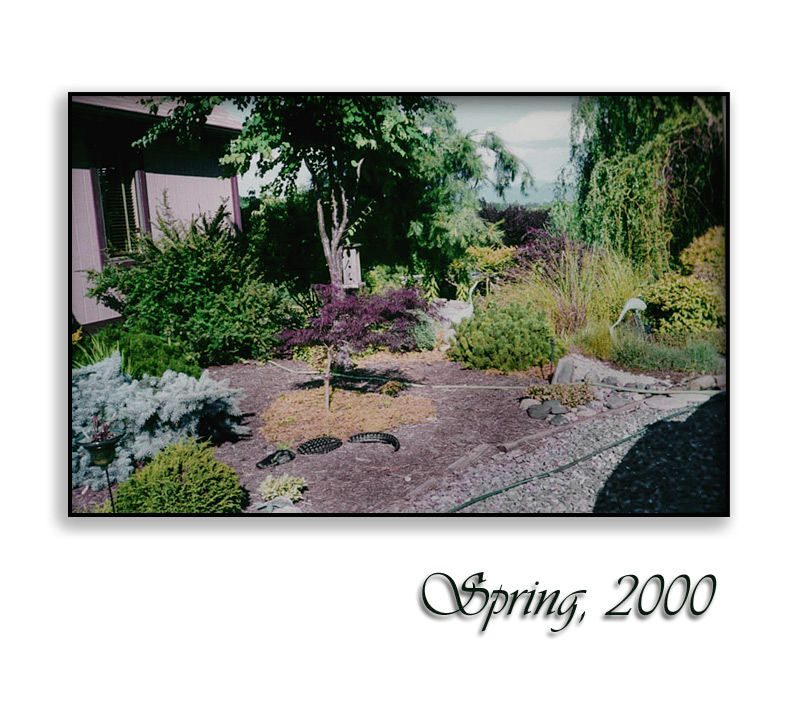 A year later, in the spring of 2000, the border to the right side of the front door is beginning to take shape.

Plantings in this area include: Colorado Spruce (Picea pungens 'Glauca Prostrata'), Japanese Maple (Acer palmatum var. dissectum atropurpureum 'Crimson Queen'), Bridalwreath Spirea (Spirea pruniflora), Katsura Tree (Cercidiphyllum japonicum), and a weeping Eastern White Pine (Pinus strobus 'Pendula') and a very fast growing Willow with a unique form (Salix x erythroflexuosa 'Scarlet Curls') planted on the slope behind a small pond which is behind the heron sculptures in the photo. Two Mugo Pines (Pinus mugo) were also planted but suffered through the years and have been removed.
0 comments leave a comment 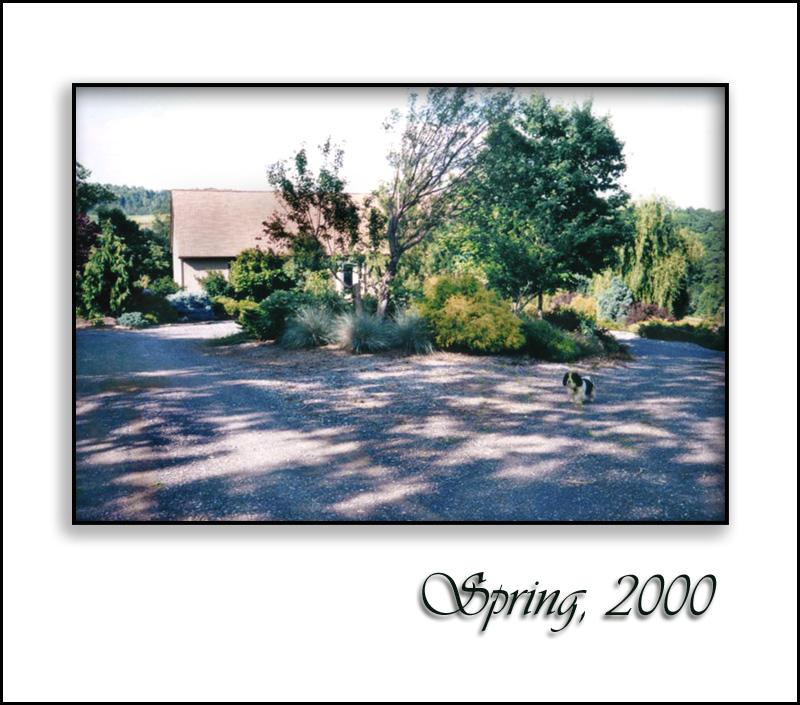 The plantings in the center island have now grown enough to provide some privacy from the road.
0 comments leave a comment 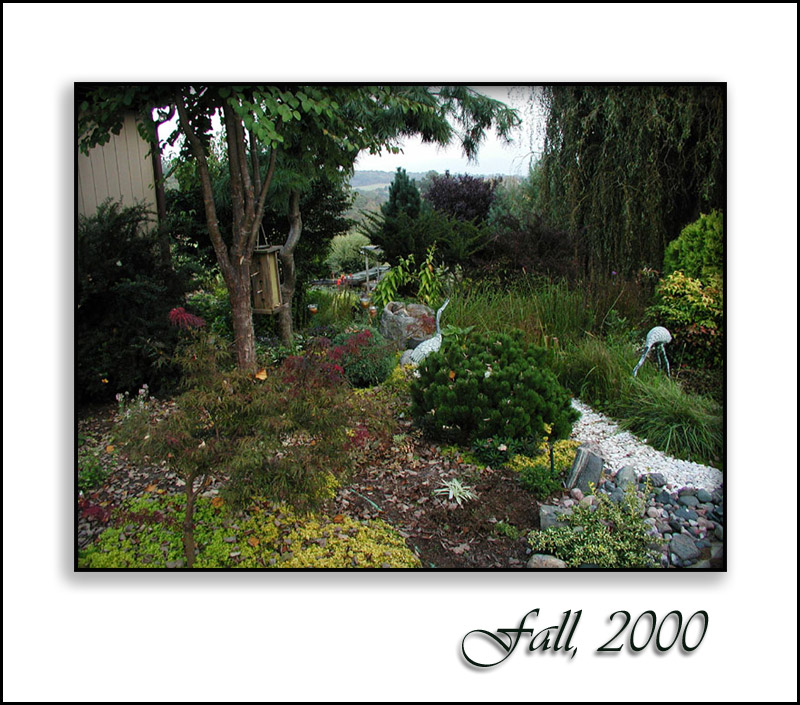 Another glimpse of the front border in the Fall of 2000. The slope behind the small pond drops down to the driveway below where the larger pond is located which you'll see photos of soon.
0 comments leave a comment