Gallery Forty-Seven: How using words in pictures can expand meaning 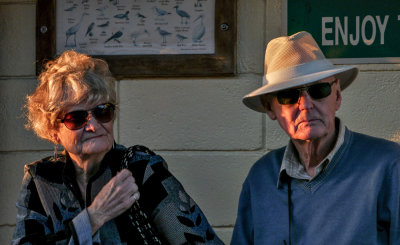 Evening at the pier, Naples, Florida, 2013
This couple is looking directly at my camera through their sunglasses. They remain impassive, neither frowning nor smiling. They are seated on a pier full of tourists and fishermen out for an evening of pleasure and sport. Yet this couple does not seem to overtly enjoy the moment, even if the setting sun bathes them in warm light and the poster just behind them urges them to do so. I only include a corner of the poster – the corner containing the incongruous word that makes this image work.
4 comments leave a comment 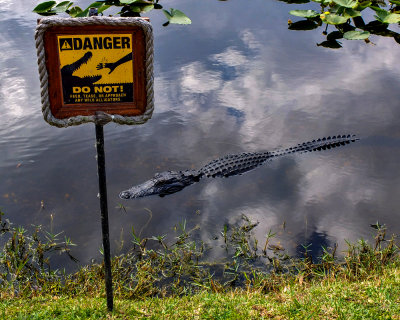 Too close for comfort, Everglades National Park, Florida, 2013
The huge alligators that ply the waters of this particular swamp invariably seem to crawl ashore precisely next to a sign that warns humans of dire consequences if they should dare approach. It is almost as if this alligator somehow knows that the sign offers a degree of protection from those who would bother it. We saw several alligators dozing on the grass directly below some of these signs, however I preferred to wait for this particular beast to glide towards one of them. I made this image when its nose seemed almost ready to touch the post. The words on the sign are explicit, and so is the graphic drawing showing four human fingers abruptly severed at the joints.
2 comments leave a comment 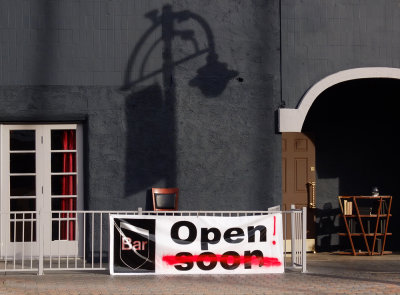 Easy Edit, Palm Springs, California, 2013
The incongruity of this drinking establishment’s signage speaks of both thrift and creativity. With just a simple slash of spray paint and an exclamation point, this bar’s management alters the content of its sign to change the past into the present, and does it instantly -- at minimal expense. My image of this sign works even more effectively because of the composition and the color scheme. The white doorframe at left and white arch at right are linked by the horizontal white sign and white metal fence in the middle of the image. Meanwhile, the curve of the white arch is echoed by the massive curving shadow of the streetlight imprinted on the gray wall. A thread of red also flows through the image, starting with the red drapery within the white door at left, culminating in the emphatic red editing on the signage.
0 comments leave a comment 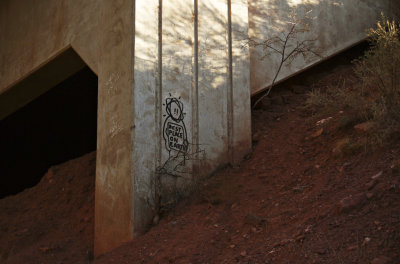 Welcome to Sedona, Oak Creek Canyon, Arizona, 2009
The words, and the figure holding them, are the subject of this image. A cartoonish, otherworldly figure holding a simple sign underneath the Midgely Bridge on the outskirts of Sedona tells us that we are in the best place on earth. To even see this sign, one must climb down a step incline and view the foundations of the bridge itself. Perhaps it is our reward for undertaking such an effort. It is a masterful piece of graffiti. The strange figure, with exclamation points for eyes, represents an impression of Sedona that many of its spiritually oriented residents would probably agree with.
8 comments leave a comment 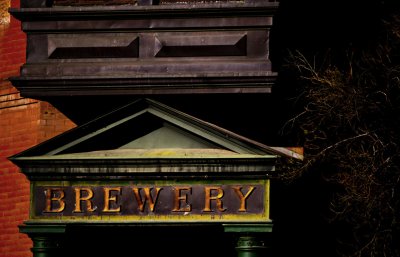 Brewery Gulch, Bisbee, Arizona, 2009
Bisbee is an isolated border town, only ten miles from Mexico. Over the last hundred years it has seen boom and bust. In 1900, it had 20,000 inhabitants. Today it has 5,000. It is a old copper mining town, stacked vertically upon the side of a canyon, frozen in time. At its heart was a street known as Brewery Gulch. Once jammed with saloons, brothels, and gambling dens, Brewery Gulch existed to take money out of miners pockets around the clock. The street is still there, now filled with shops, inns, galleries, and restaurants. The Brewery, which once gave the street its name, is gone, even though its name can still be seen etched in copper within this cornice over the door. We see only a small piece of old Bisbee in this image, but what a characteristic image it is. One word, carved in the very color of the mineral that gave once this town its identity.
2 comments leave a comment 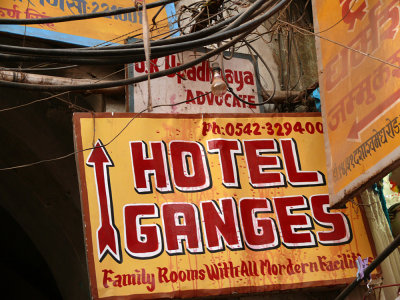 Hotel Ganges, Varanasi, India, 2008
Varanasi, like all Indian cities, offers an abundance of hand-lettered signs featuring oddly spelled words. (The Hotel Ganges must be located somewhere above the tangle of wires in this photograph.)
2 comments leave a comment 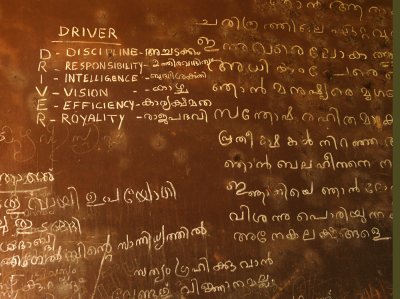 Truck driver training, Cochin, India, 2008
This chalkboard was hanging on the wall of a truck driver’s school just outside Cochin. I don’t read Hindi, so I don’t know what most of these words say. (I am not sure what “Royality” means either. Royalty? Reality?) It really doesn’t matter – what matters is the embellishment of language so common in Indian communication. No matter how small the task, it takes many words to explain it. Something as straightforward as how to properly drive a truck can become a very complex matter in Cochin.
2 comments leave a comment 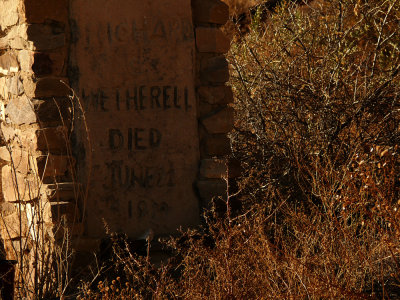 Murdered, Chaco Culture National Historic Park, New Mexico, 2007
While exploring the ruins of ancient Chaco, I found a small cemetery holding the grave of Richard Wetherell, a controversial figure in the history of the Southwest. He spent much of his life exploring the region, excavating sites, and selling artifacts. (Wetherell was one of the two cowboys who discovered The Cliff Palace in Mesa Verde.) Complaints from archeologists halted his activities and led to the creation of the first US law protecting antiquities. Wetherell continued to operate a trading post at Chaco, until he was shot and killed by a Navajo in 1910. He never left this place -- his bones rest under this stone. An amateur, probably someone who knew Wetherell, inscribes the words on that tombstone. The crudeness of the lettering, dimly seen through the shadows, adds a feeling of authenticity to the image.
8 comments leave a comment 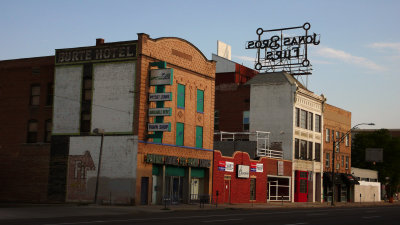 Broadway, Denver, Colorado, 2007
At first glance, this appears to be descriptive rather than expressive. But the longer we look at it, the more ironic the words in this image become. Broadway is a commercial street, and as it flows out of the downtown area of Denver, it is lined with cheap hotels, pawnshops, and saloons. I made this image on an early Sunday morning – there are no cars parked along the street, and not much traffic, either. The Burte Hotel no longer exists. More recent signs tell us that it has become the Jumping Jack Pawn Shop. As the eye moves down the street, it notes, in reverse, a giant sign advertising Jonas Brothers Furs. That incongruous sign becomes the ultimate irony here – the ghost of a luxury business dominating a strip of buildings that no longer dispense luxuries.
4 comments leave a comment 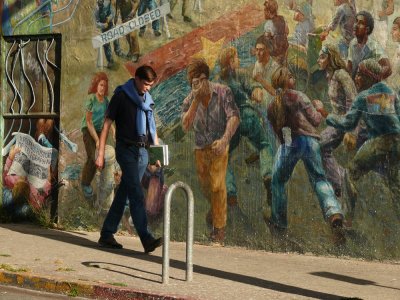 Walking through history, Berkeley, California, 2007
Berkeley's Telegraph Avenue was the core of counter-culture life in the 1960s. A mural just off Telegraph Avenue tracks the key events of the student rebellion at the University of California that launched a cultural revolution. The words in this image offer context and even a title. The figure at left reads a newspaper bearing the headline “A people’s history of Telegraph Ave.” A barrier reads “Road Closed” – a symbol of the police presence in Berkeley during the student revolt. I saw this student coming when he was a block away and waited for him to enter my frame. His course is defined by a long shadow on the sidewalk – a straight and narrow diagonal that bypasses the complexities that assault him from the wall. Yet the play of light and color in this image bonds him to the past, even if he does not seem to realize it.
21 comments leave a comment 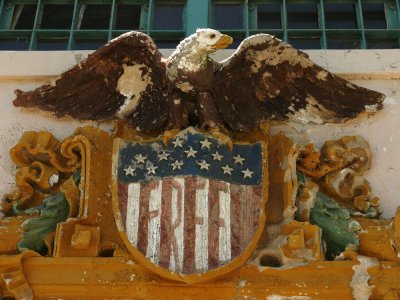 Occupation, Alcatraz Island, San Francisco Bay, California, 2007
In the late 1960s, after Alcatraz prison had closed down, hundreds of Native American political activists occupied the island as a symbolic "reservation." The graffiti they left behind can still be seen on the US emblem over the entrance to the prison. The occupiers have cleverly built the world “Free” out of four of the red stripes in the shield. That word is framed in an ironic context. The eagle and shield are symbols of freedom, yet the old prison is not. Historically confined to reservations, Native Americans have suffered imprisonment of another kind. I zoom in on the shield to stress this alteration, and include the crumbling eagle for context. Without the word “Free”, this would be a picture about age and disrepair. With it, the image becomes a political statement.
10 comments leave a comment 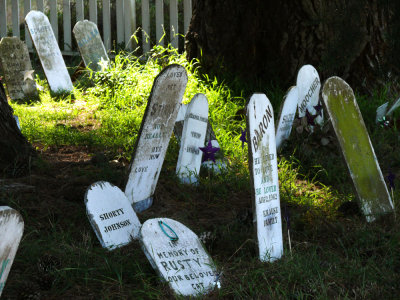 Pet Cemetery, The Presidio, San Francisco, California, 2007
Formerly a place where military pets were buried, this small, secluded cemetery became part of the park system when the Presidio army base closed in 1995. The graves and wooden markers are in varying states of disrepair. The markers lean in various directions, as if they can’t make up their minds whether to stand or fall. Dogs, cats, birds, rabbits, hamsters, lizards, goldfish and mice are buried here -- below an on-ramp to the Golden Gate Bridge. The words on the grave markers are incongruous, since they are often informal, and sometimes even amusing. (“Loved Pet Stinky – Not Really – Bye Now”) They speak of animals, not man. Yet in some of these words of mourning, the sense of loss is indelible and often haunting. A splash of sunlight divides the dark shadows here in half – offering a glimmer of hope to an otherwise grim scene.
6 comments leave a comment