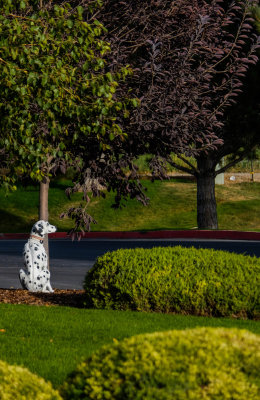 It never moved, Twin Falls, Idaho, 2018
Still photography and statues share a lot in common. Photographers can stop a subject in time forever. And a statue is, from its inception,remains utterly still forever, as well. When I came upon this scene, I was drawn by the utter stillness of the Dalmation sitting placidly at the base of a small tree. After making this image, I suddenly realized that this dog never would move -- I was looking at a metal statue. The meaning of my picture changed for me at that moment. The folks who placed this lawn ornament in front of their house obviously enjoyed the incongruity it creates when others realize their dog is not real. My image compounds the joke through incongruity, as well.
0 comments leave a comment 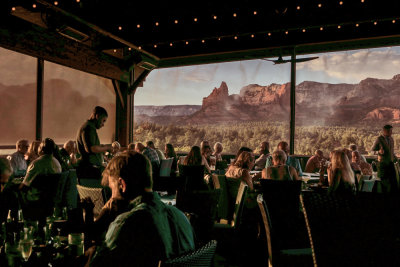 Dining or dreaming? The Mariposa, Sedona, Arizona
This restaurant offers its patrons a spectacular view of Sedona's famous "red rock" scenery. These people are dining on a summer evening in an open-air space, surrounded by a surreal view that would seem impossible to take for granted. At dusk, a setting sun paints the panoramic sweep of ancient cliffs in light, shadow, and color. Misters at the edges of the roof make a warm evening much cooler, and add a gauzy effect to the scene. My photograph contrasts this mass of diners, and their servers who walk among them, to the incredible scenery that lines the horizon in the background. The image offers a frame within a frame to guide the eye, and the pair of servers at left and right create a base for the triangular composition that draws the eye to the pointed peak in the background.
Everyone appears to be absorbed in their food and conversation. None seem to consider what surrounds them at this moment, except for us who view this photograph. We can see both diners and scenery at the same time, and it is this contrast that brings incongruity to this image. Dozens of these diners, surrounded by the stuff of dreams, may be taking the spectacular view for granted at this moment, yet many of them will likely walk away remembering the experience.
2 comments leave a comment 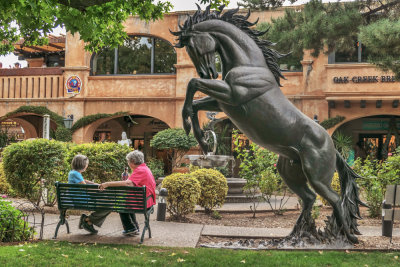 Taking art for granted, Tlaquepaque Arts and Crafts Village, Sedona, Arizona
Incongruous images are often created by photographing people who appear to be oblivious to their settings. I spent an hour roaming the squares, parks, and galleries of this well-known arts and crafts village looking for such an opportunity. I found these folks seated on a bench, engaged in conversation. They are probably well aware that they are seated almost underneath a huge bronze sculpture of a rearing stallion, yet at this moment they seem more interested in speaking with each other than looking and responding to the art that surrounds them. The horse appears to be about to crush them beneath its hooves and they pay it no heed. They are oblivious -- indeed impervious -- to the implied danger looming above them. The horse is huge, while they are small in scale. They appear to be utterly unconcerned because they take their surroundings -- a place full of art - for granted. They can't see what we, as viewers, see here. We are amused, while they are not.
0 comments leave a comment 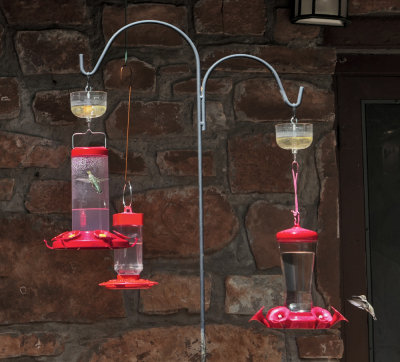 Hummingbirds frozen in time and place, Sedona, Arizona
This image began with an attempt to simply capture a pair of hummingbirds lunching at a group of feeders. I needed not only to stop motion and freeze them in time -- I also wanted to integrate the birds into the design of the photo itself. I needed to place a bird on each side of the frame in order to unify the image, creating a diagonal composition leading the eye through the feeders from one bird to the other. Incredibly, I caught the bird on the left as it was incongruously suspended in space behind a feeder, making it seem as if it is caught within it. Obviously luck plays a huge role in such an incongruity. I shot fifty images of this scene and later found this image among them. Because of this incongruity, this photograph was the only one of them that goes beyond description, and instead stimulates the imagination of the viewer.
0 comments leave a comment 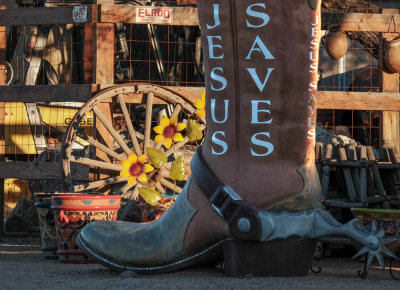 Jesus Saves, Cave Creek, Arizona, 2015
A giant boot promoting an evangelical concept dominates this craft shop parking lot. The motto seems incongruous when seen emblazoned upon a classic cowboy boot. The massive scale of the boot itself offers still another incongruity. The huge boot momentarily lives in the shade, and contrasts to the illuminated sunflowers arrayed behind it. The image offers a whimsically symbolic view of contrasting incongruities and cultures.
7 comments leave a comment 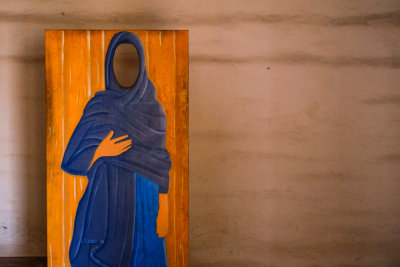 Faceless, El Presidio de Santa Barbara State Historic Park, Santa Barbara, California, 2014
The buildings of this Spanish military outpost, dating back to 1782, have been either restored or reconstructed. As I ended my tour, I entered a room that was a family’s living quarters, and this incongruous vision greeted me. This life sized painting fills a board six five feet tall. The figure itself is striking in its color and gesture. A hole appears where the face should be, which tells us that the painting is there for to visitors take “selfies” of themselves transformed into an 18th century woman. My photograph of this figure without a face tells an entirely different story. It becomes a painting of a person forever lost to memory. The painting throws a large shadow on to the wall behind it, making the hole where the face should be darker and more ghostly and incongruous than expected. I also placed the figure off to one side of my frame, implying that the painting stands alone within an utterly empty room.
6 comments leave a comment 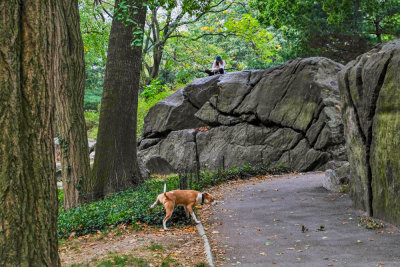 Juxtaposition, Central Park, New York City, New York, 2013
I was concentrating on photographing a lone figure seated atop a massive rock outcropping. She was lost in her work, and never noticed the male dog relieving himself in the foreground. The juxtaposition of the woman and the dog express the vast range of activity and opportunities available to the millions of New Yorkers who cherish this vast park in the middle of Manhattan. The woman has taken over the huge rock, while the dog marks its own territory along the path below it.
4 comments leave a comment 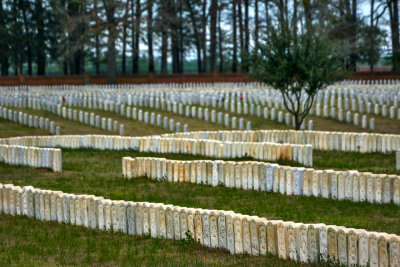 The cost of war, Andersonville National Cemetery, Andersonville, Georgia, 2013
More than 15,000 Union prisoners of war are buried here, many of them dying of malnutrition and disease at the notorious Andersonville Confederate Prison Camp within a space of only 14 months during 1864 and 1865. This massive toll is grimly expressed here by the rows of grave markers spaced only inches apart. So many died so quickly that burial space was sharply limited. I place these strangely compacted rows of graves in the foreground of this image, and incongruously contrast them to the normal spacing of later burials placed in soft focus, and moving in a different direction, within the background. I organized this image in layers, beginning with the sharply focused grave markers in the foreground, and gradually fading them into softer focus as they recede. A lone tree separates the rows of older markers from the newer burials behind them. In the distant background, a red wall encloses the acres of stones, separating them from a stand of trees. This is a scene of death juxtaposed with life, a poignant reminder of the savage war that tore the United States apart 150 years ago.
12 comments leave a comment 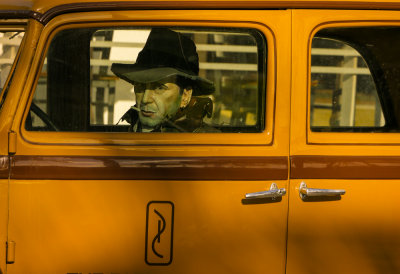 Double Take, Miami Beach, Florida, 2013
This vintage limousine, generally parked in front of a Miami Beach hotel, draws attention to itself (and its owners) in several incongruous ways. It dates back to another era, and is painted a bright yellow. A scruffy man with a cigarette hanging from his lips and a rumpled fedora upon his head, stares at us from its driver’s seat. Tourists stop to pose for pictures with the car and its incongruous driver, yet the driver never acknowledges them. Is he a street performer, or is he a mannequin? By moving in to stress the man, rather than the car itself, I dare my viewers to answer that question.
2 comments leave a comment 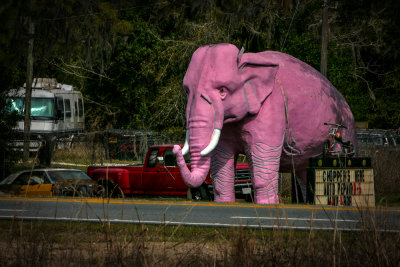 Pink Elephant, near Inverness, Florida, 2013
The life sized elephant stands along side of Highway US 41 – the Tamiami Trail – to draw attention to a local auto repair business. It is a double incongruity in itself – an animal that never moves, and is painted a shocking pink. Its sheer scale never fails to draw the eye of passing motorists. We stopped and I walked across the road to place the pink elephant in a layered composition that places it into a context. A layer of weeds leads to the highway itself, and then to a layer featuring the elephant, advertising signage, and an assortment of cars and trucks backed up next to a forest.
4 comments leave a comment 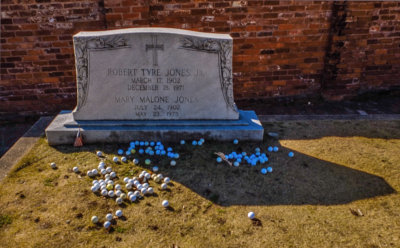 In tribute to Bobby, Oakland Cemetery, Atlanta, Georgia, 2013
Robert Tyre “Bobby” Jones Jr. was a lawyer. He was also the most successful amateur golfer the world has ever seen from 1923-1930. In his final season, he won all four of golf’s major championships, defeating amateurs and professionals alike. During his brief seven year career, he played in 31 major tournaments, winning 13 of them, and finishing in the top ten 27 times. He later helped found the Masters Golf Tournament and the course on which it is played each year. Jones died from a crippling spinal disease in 1971, and his fans have honored his memory by converting his gravesite to a putting green (note the incongruous putting cup within the shadow adjacent to the grave marker.) There are numerous golf balls (along with other mementos) also incongruously in residence here, many of them gathered into the long shadow cast by the marker. The greatest golfer of the Roaring 20s has not been forgotten.
0 comments leave a comment 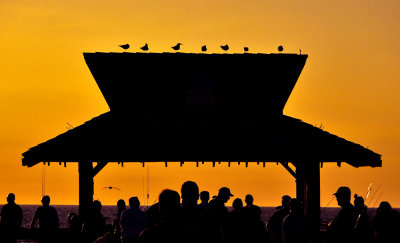 Freeloaders, Naples, Florida, 2013
The shelter at the very end of the Naples Fishing Pier offers an incongruous gathering place for both man and bird. At sunset, this shelter becomes a busy place, as fishermen fish, tourists stroll, and seagulls and terns wait patiently for handouts from both. I abstract my image, placing the sun behind the shelter’s roof, and stress the row of seven birds poised for potential free snacks. By comparing that row of small birds on the roof to the row of large human heads gathered below them, I create an incongruous juxtaposition of silhouetted shapes.
0 comments leave a comment