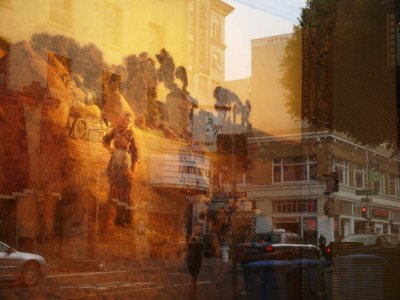 Past meets present, San Francisco, California, 2007
Walking past an art gallery, I noticed a painting in the window depicting pioneer life in the American West. What happened to that America? I photograph the reflection of a busy city street that appears on the gallery window. The reflection is filled with traffic, garbage cans, and commercial buildings, which overwhelm the historical painting. A pioneer woman seems to look with dismay on what her sacrifices have produced.
10 comments leave a comment 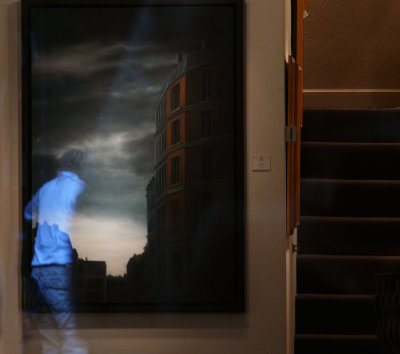 Going home, San Francisco, California, 2007
The figure that seems to be vanishing into a painting of an old building is actually a reflection on the window of an art gallery. I was able to get both the window reflection and the painting, which was on the rear wall of the gallery, into the same zone of focus. This man is going home by absorbing himself in the past.
7 comments leave a comment 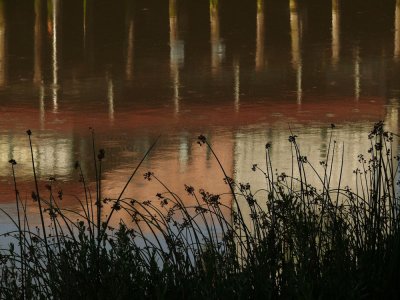 Pilings and reeds, Petaluma River, Petaluma, California, 2007
The Petaluma River flows through the heart of the city. It is actually a tidal estuary linking San Pablo Bay and San Francisco Bay. The reflected pilings link the actual pilings to the reflections of the buildings in the river. The abstracted array of reeds in the foreground offers a sharply focused focal point and a sense of depth perception.
2 comments leave a comment 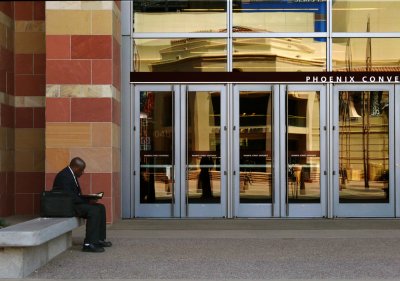 Convention Center, Phoenix, Arizona, 2007
I saw this man studying his notes outside the entrance of the convention center. He does not notice the dramatically surreal play of reflection on the doors, but we do. It creates an incongruity. He is essentially inactive, a study in repose, while the tinted glass doors reflect a cubistic version of a theatre across the street. The theatre performs in the glass to an invisible audience.
9 comments leave a comment 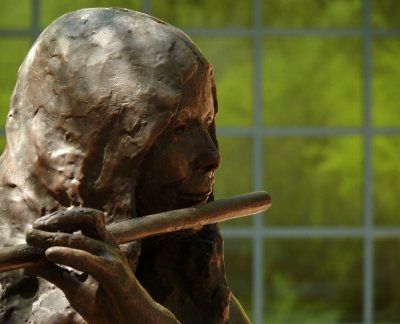 Flute, Herberger Theatre Center, Phoenix, Arizona, 2007
A bronze statue of a flute player, created by Arizona sculptor John Henry Waddell, plays its tune just outside the doors of this theatre. Although the statue stands in the deep shadows of trees directly overhead, the bright sunlight on the surrounding plaza is reflected back on to the bronze face, creating golden highlights that express both the beauty and value of music. I love to work with reflected light. It is usually softer and warmer than direct light, and it can produce images of great beauty, even at mid-day. The trees, meanwhile, are reflected in the doors of the theatre. This green reflection offers the statue a vivid background, and that color also symbolizes the vitality existing within the theatre. Ultimately, this image expresses meaning through two entirely different kinds of reflections: sunlight reflecting golden highlights on to the face of the statue, and the softly focused green trees reflected in the glass door of the theatre.
2 comments leave a comment 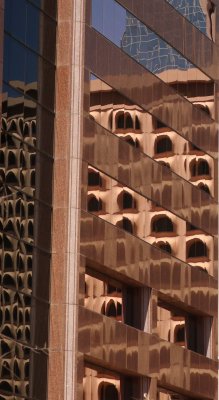 Corporate beehives, Phoenix, Arizona, 2007
While walking through the center of downtown Phoenix, I noticed reflections in downtown office buildings that transformed other buildings into symbolic beehives.
A beehive is, of course, a place of industry. It is where a product is created. I thought it made a perfect metaphor for a corporate structure. Not only is the beehive replicated on glass -- it is also reflected on the polished granite facing between the floors of glass windows. My camera position and the angle of the sun combine to create an image that is utterly surreal and ultimately appropriate.
14 comments leave a comment 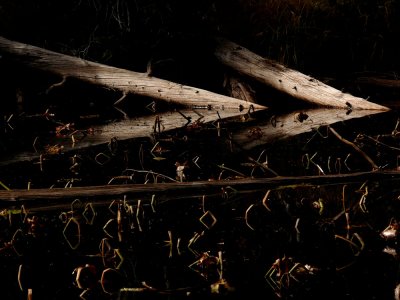 Resurrection, Issa Lake, Yellowstone National Park, Wyoming, 2006
This pair of fallen tree trunks creates a dynamic reflection that incongruously turns death into life. A pair of twin arrows sweeps across the image, helped by a floating log that echoes their path. I used my spot meter to brighten those arrows, making the rest of the lake much darker.
4 comments leave a comment 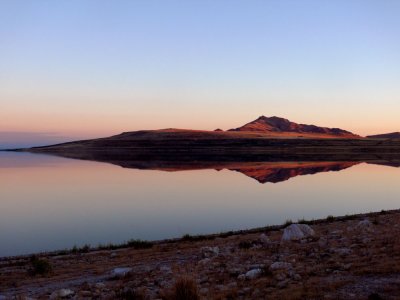 Mirrored, Antelope Island, Utah, 2006
Antelope Island is reflected in a mirror-like channel of the Great Salt Lake, creating a huge finned rocket tinged in reddish gold. I made sure to anchor the image with the rock- strewn foreground. Without this foreground, the reflected image would lack context and become static.
3 comments leave a comment 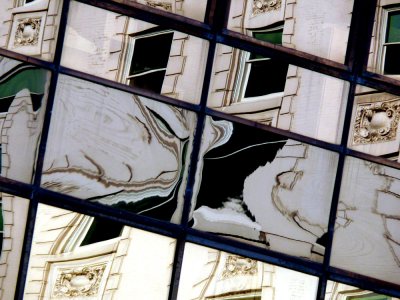 Bending the past, Salt Lake City, Utah, 2006
By reflecting the ornate Joseph Smith Office Building in the windows of a contemporary structure just across the street, the past seems to morph into both the present and future.
I tilted the camera to create the repeating diagonal lines of the window frames, adding considerable energy to this image.
8 comments leave a comment 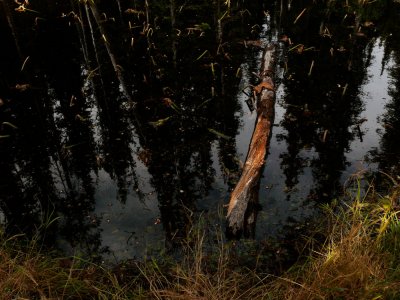 On Issa Lake, Yellowstone National Park, Wyoming, 2006
Ironically, the dead log in this image is far more vivid in coloration than the reflections of the dark trees in forest that surrounds this lake. I moved my vantage point so that the log floats between, instead of over, the reflected trees and I anchored the image with grass that provides a base for this photograph.
2 comments leave a comment 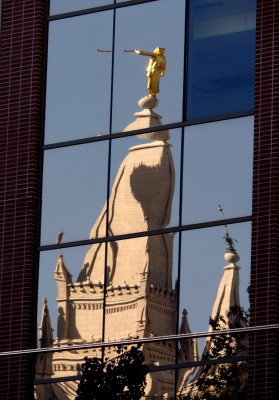 Secular pressures, Salt Lake City, Utah, 2006
I was able to lift the top off of Salt Lake’s Mormon Temple by shooting its reflection in a nearby office building. The grid created by the office windows, reminiscent of a Mondrian painting, offers a metaphor for secular society, while the Temple represents religious faith. All religions continually face pressures and tensions created by the secular world in which they exist. This reflection graphically makes that point.
4 comments leave a comment 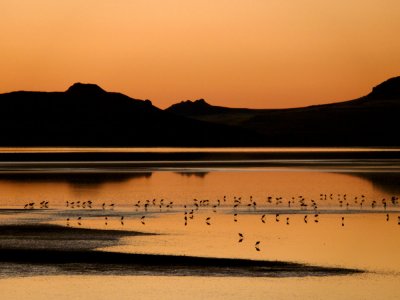 Waders, Antelope Island State Park, Utah, 2006
Not only is the island itself reflected in this image, but each of the many wading birds that feed in its surrounding waters at sunset also cast their reflections, doubling the number of birds we see. I build this image around a series of horizontal shapes, beginning with the sandbar at bottom, followed by the band of birds, and then the reflected island, followed by the island itself. The golden color bonds all of these elements, adding a positive metaphor: these birds are safe here. No harm can come to them in this beautiful place.
4 comments leave a comment