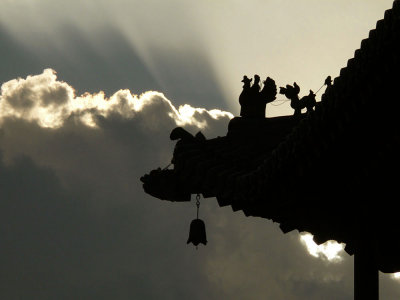 City gate, Pingyao, China, 2007
This is more an image of light than it is an image of a gate. I use the silhouette of the gate as context, and the light on and behind the clouds as my subject. The light explodes from the clouds in a band of connected rays, which echo and complete the upward thrust of the roof of the gate.
6 comments leave a comment 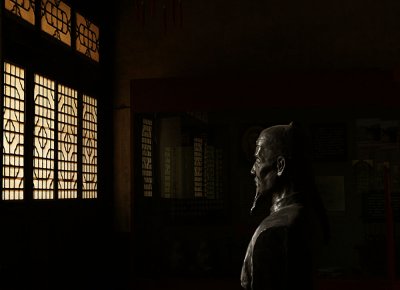 Banker’s house, Pingyao, China, 2007
Pingyao was the first banking center in China. Lei Livtai established the country's first draft bank here. A statue of Livtai stands in his house, which, like much of this ancient city, still stands. I exposed for the light coming through the decorative door panes. Just enough light falls on the statue to define it’s profile. It seems to float in space, just as Livtai’s spirit pervades the house where he lived and died.
8 comments leave a comment 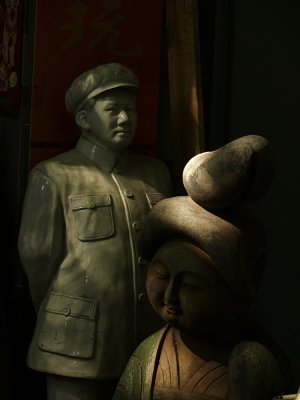 Sculpture for sale, Flea Market, Chaotian Palace, Nanjing, China, 2007
A marble statue of Mao and a terra cotta sculpture of an ancient Chinese lady stand side by side in the shadows of the Flea Market adjoining Nanjing's Chaotian Palace complex. The play of dappled light and shadow on these sculptures was exquisite – the kind of light photographers dream about. I used my spot meter to expose for the highlights on the lady’s hair, and let the rest of the image rest in varying degrees of darkness, implying, rather than showing all of the details. The woman’s face is more heavily shadowed than Mao, suggesting traditional subservience to authority.
2 comments leave a comment 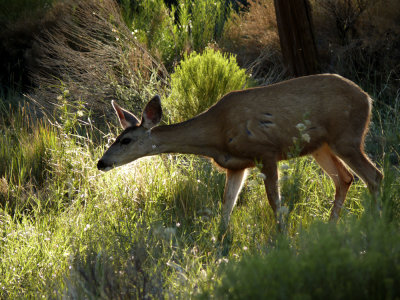 Mule deer, Grand Canyon National Park, Arizona, 2007
Walk anywhere along the rim of the Grand Canyon just after dawn and you will see mule deer grazing on hotel lawns and in the high grasses that line the trail. I saw this one just off the Bright Angel Trail, framed in beautiful backlight. The light was streaming through the trees, creating pockets of sun and shadow. I waited until the deer move its head into the brightest spot of the picture to make this image. The light illuminates that head just as it begins to move towards a meal. It is almost a halo – a brilliant exclamation that underscores the point of the image. By exposing for the brightest part of the picture, I also darken the rest of it. In doing so, I reduce the visibility of the large scars on its back, no doubt from a predator, that mars its otherwise smooth coat.
10 comments leave a comment 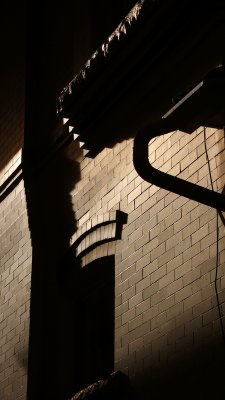 Pearl Street, Denver, Colorado, 2007
The early morning sun illuminates the brickwork on the side of an early 20th century apartment building. Using my spot-metering mode, I expose for the brightest part of the image, which plunges the shadowed areas into blackness. The large black areas within this image fragment the brickwork, dividing it both vertically and horizontally to create an incongruity. The image features that most solid of surfaces – a brick wall. Yet it the play of shadows upon that wall breaks it into pieces. The image offers a simple metaphor: things are not always what they seem.
4 comments leave a comment 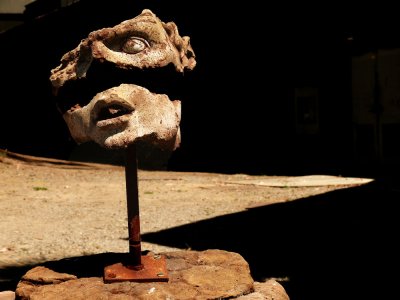 Evil Eye, di Rosa Preserve, Napa Valley, California, 2007
The incongruity of this single baleful eye on a shattered face was, in itself, worthy of a shocking image. But the interplay of light and shadow brings so much more meaning to it. The angle of the mid-day sun creates a deep shadow that cuts the sculpture in half. The upper half of the head, holding the eye in place, seems to float menacingly in space. It looks like it can follow us anywhere. Adding to that threat is the zigzag background shadow that tears the image into jagged points of light and darkness. This sculpture is one of about 2,300 works of art in the collection of Rene di Rosa. Fortunately, it can be displayed outdoors, and benefit from the natural interplay of light and shadow upon it.
6 comments leave a comment 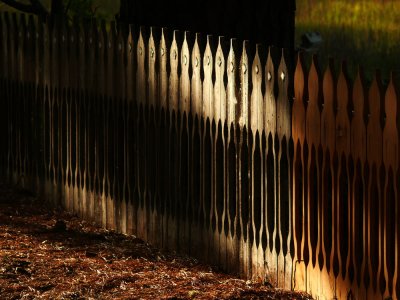 Fence, Tomales Bay, California, 2007
Tomales Bay reaches like an outstretched arm between the shores of West Marin County and the Point Reyes National Seashore. The bay, resting quietly between the hills just north of the historic Olema Valley, is lined with tiny towns and lovely homes. One of those homes was designed as a dacha, its fence echoing the spirit of Czarist Russia. The play of sunset on this wooden fence created a work of natural art unto itself. All I had to do was to spot meter on the brightest post, drawing the ornamental fence into the light out of the dark shadows falling both on it and beyond it.
A week before I made this image, I read a quote from Paul Strand, whose own iconic image “White Fence” was a turning point in American photography. Strand said of a visit to the former Soviet Union, “I saw a fence against dark woods – it was a very special fence, containing the most amazing shapes. If I’d had my camera with me, I could have made a photograph that had something to do with Dostoevsky.” Strand went on to say that those dark woods gave him the same sort of feeling you get from reading Dostoevsky’s ‘The Idiot.’ When I saw this shadowy Russian fence on Tomales Bay, and my resulting image, I thought of what Paul Strand had said, and a chill ran down my spine.
0 comments leave a comment 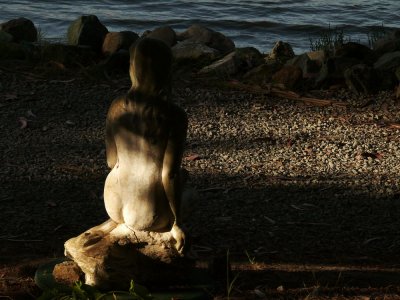 Nude, Tomales Bay, California, 2007
Just beyond the fence in the previous image, a sculptural figure of a nude woman looks out on the waters of Tomales Bay. The late afternoon sun that sculpted the Czarist Russian fence also illuminates the backside of the stone body. The figure appears almost alive, energized by the flow of light and shadow that defines the body, arms, and ever so little of cascading hair. Another band of soft evening light separates the figure from boulders and the water beyond. It seems to yearn for the water it never can reach.
4 comments leave a comment 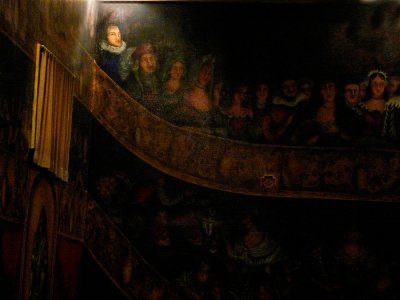 Mural, Amargosa Opera House, Death Valley Junction, California, 2007
Located in Death Valley Junction's Amargosa Hotel, just outside of the National Park, this opera house was created by Marta Becket in the 1960s. She still performs weekly in this isolated hall, formerly a borax plant infirmary. A caretaker opened the opera house for us, which gave me a chance to photograph the murals that Becket painted on its walls. This mural is at the back of the auditorium, creating an illusory balcony filled with a 17th century audience. I built this image around a single face, caught in the glow of ceiling light. Using ISO 800, I made this image hand held at 1/8th of a second, bracing the camera on the back of a seat. This painted figure, seated high in the corner of the painted balcony, would be the most distant member of the audience – yet because of the interplay of light and shadow here, I’ve made him the most important.
3 comments leave a comment 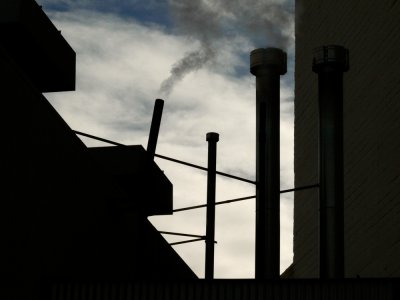 Smokestacks, Bakersfield, California, 2007
We passed through the city of Bakersfield on the way back from Death Valley. It was a Sunday morning, and the streets were deserted. Yet these chimneys were belching smoke into a semi-overcast sky. Exposing on the bright sky, I abstracted the smokestacks and the surrounding structures and supports, creating a silhouetted geometric pattern of shapes that symbolize industry. I positioned the flow of smoke so that it flows into the one patch of sky that remains blue.
0 comments leave a comment 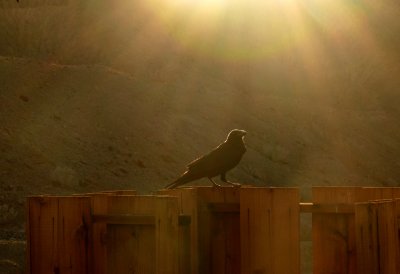 Sunburst, Death Valley National Park, California, 2007
Wherever visitors go in Death Valley, ravens are sure to follow. I found this backlighted raven waiting for handouts in a parking area near Artist’s Palette. With a setting sun just behind it, the raven seemed to be enjoying his moment in the limelight. When we shoot directly into such light as this, we will usually get an image full of distracting reflections, known as lens flare. I minimized the distraction of lens flare by lowering the top edge of my frame as far as possible to cut the sun out of the picture. I took off my cap and tried to block the sun with it as well. I wanted the effect of a sunburst without all those little round distracting reflections that usually come along with it. And that is what happened here. The sunburst is there, but the distractions of lens flare are not.
4 comments leave a comment 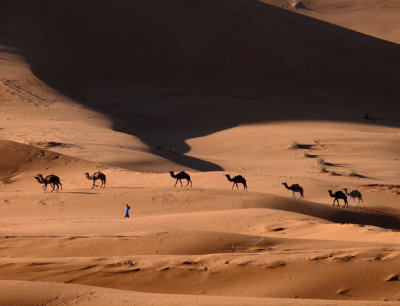 Camel herd, Erg Chebbi, Sahara Desert, Morocco, 2006
The sight of a camel herd moving past our camp in the Sahara was startling. It seemed like a scene out of a movie. These particular dunes, in fact, have been the setting for many films, including "Lawrence of Arabia" and "Sahara." I isolated only a portion of the herd for this image, choosing a group of camels that was strung out against the sand instead of bunched together. I also made sure to include a solitary camel driver, walking alongside just below the herd. I also waited until this particular group of camels came opposite the huge, funnel-like shadow on the dunes just above them. It is the shadow that gives this image its expression and power, symbolizing a sense of both time and mystery.
4 comments leave a comment