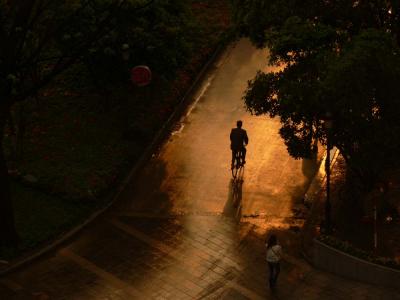 Golden path, Guilin, China, 2006
Guilin's climate was warm and moist. It rained every night during our visit, leaving its wet streets to greet the morning light. Dawn light reflected on the wet street creates a path of gold for this cyclist, a symbol of promise for the day to come. Colors carry significant symbolic meaning. This golden glow, for example, is nostalgic, warm, rich, and positive.
A few hours later, the sun was gone, and this street became an oil stained, ugly bluish gray, suggesting pollution, wear and tear.
14 comments leave a comment 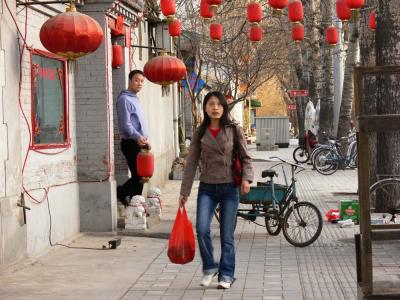 Seeing red, Beijing, China, 2006
Red is China's favorite color. There is a lot of red to be seen on this Beijing Street. I was attracted first by the red lanterns decorating this house and the street in front of it. A woman wearing a red t-shirt under her jacket walked towards me, carrying a red plastic bag and a red purse. Just as I was about to shoot, a man emerged from the doorway, carrying another red lantern. Later I noticed that the tiny lions at the doorstep had red ribbons on their necks, a window had a red frame, a red bag was resting on the sidewalk, red electrical wire was used to power the lanterns, and there are even red street signs in the far background. Coincidence? I don’t think so. Red is the most powerful primary color, rich in symbolic meaning, and historically linked to Chinese culture.
2 comments leave a comment 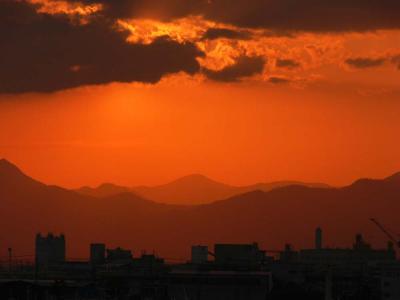 Memories, Hiroshima, Japan, 2006
As we sailed from the Hiroshima port, the sky turned fiery red -- a stirring sight, to say the least, considering the emotional nature of this visit. Hiroshima is extremely moving to those who visit the Peace Memorial Museum or who have any memory of World War II and the first use of an atomic bomb. Color can had profound effect on human emotions – in this case, it recalls the firestorm that once incinerated this city and its inhabitants. This sky seems to be telling us to never forget what happened here
6 comments leave a comment 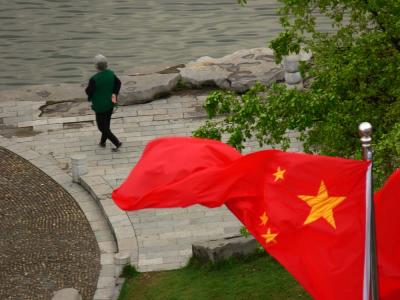 Morning exercise, Guilin, China, 2006
Our Guilin hotel overlooked Banyan Lake. Every morning, exercisers would go through their routines on its shore just below our windows. The Chinese flags flying in front of our hotel provided vivid counterpoint to their labors. The primary colors of the flag are so strong that the picture is more about national identity than exercise, turning the exercising woman into context.
6 comments leave a comment 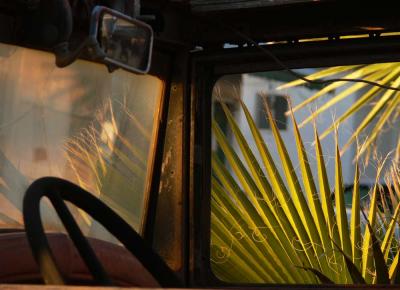 Time Traveler, Route 66 Motel, Barstow, California, 2006
The yard surrounding Barstow's vintage Route 66 Motel is strewn with the rusted hulks of cars that once traveled Route 66 itself. This one is permanently parked next to a palm. The most striking feature of this image is the symbolic value of its color content. I use color here to symbolize a form of time travel. The rusted interior, representing the past, contrasts with the vitality of the green and yellow palm, which represents today. Meanwhile, the muted golden color seen through the dirty windshield symbolizes the undefined future.
9 comments leave a comment 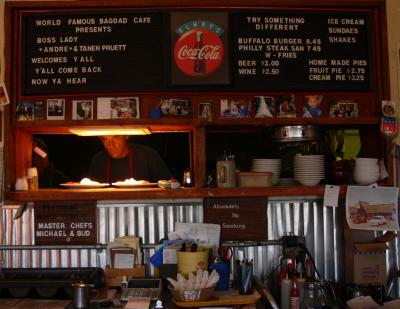 Breakfast at the Bagdad Café, Newberry Springs, California, 2006
The Bagdad Café is a remote roadhouse still serving meals to travelers along the former US Route 66. It was the location for a German film of the same name, shot here in 1988.
Several of the café’s staff were extras in the movie. I made this portrait of the chef (Would this be Michael? Or is it Bud?) looking out at us over a few of the eggs he made for a hungry group of 20 photographers (including several pbase artists) who filled every seat in the house. This image works well in color because of the sense of presence it gives to the chef and the emphasis it places on the Coke ad that dominates the bill of fare. I also shot a similar image at the café in black and white, a journalistic picture that takes us back into time. See it by clicking the thumbnail below: 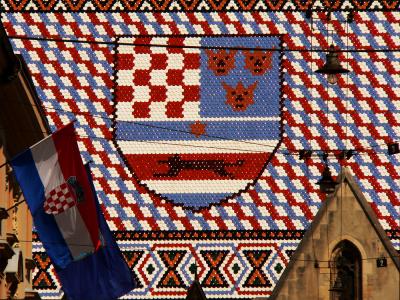 Roof Tiles, Church of St. Mark, Zagreb, Croatia, 2005
The tiled roof of Zagreb's Church of St. Mark bears the coats of arms of Croatia, Dalmatia, Slavonia and Zagreb. Here, one of those coats of arms almost fills the view down Cirilometodska Street. If ever an image called for color, it is this one. Colors project the symbolic meaning of heraldic subjects. Not only is the color essential to the roof tiles. It also makes the flags function as flags. The only thing in this image not totally dependent on color for meaning is the portal of the church itself. I used the full length of my 432mm telephoto lens to compress those flags, along with the light fixtures hanging over the street, into the tiles.
2 comments leave a comment 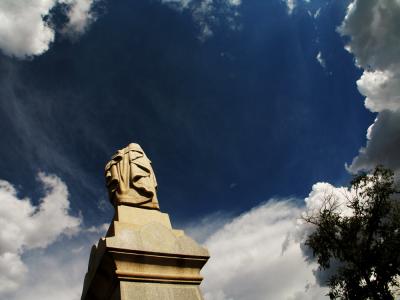 Eternity, Fairview Cemetery, Santa Fe, New Mexico, 2005
I have made many images of cemetery monuments, but rarely one as dependent on color for its meaning as this one. This is the only significant monument in a parched 19th century burial ground riddled with prairie dog burrows. Capped by a broken column symbolizing a life cut short, the monument is draped in a pall. Just as I began to shoot, the cloud cover parted, revealing a patch of sky overhead, streaked by a layer of almost invisible wisps forming a transparent shroud. I shifted my camera position to push the monument into the heart of that sky. Later, while post processing this photograph, I found that the more contrast and saturation I added to the image, the deeper the blue in the sky became. Played against the neutrality of the clouds and the tree, as well as the grim high key lighting on the tan monument, the color of that sky becomes a vivid symbol of eternity, an ideal metaphor to express the character of this haunted place.
8 comments leave a comment 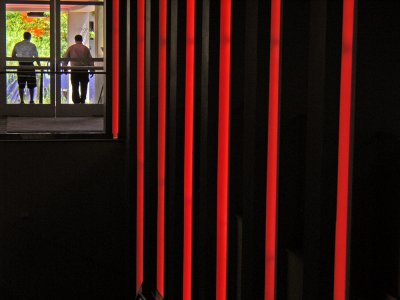 Red Zone, Scottsdale, Arizona, 2005
Red always draws the eye. So do patterns of rhythmic vertical lines. And when we bring them together, the effect can be mesmerizing. I found such a combination of graphic effects in the lobby of a hotel not far from were I live. Graphic effects can produce startling form, but we need more than just form itself to create an expressive image. In this case, I was able to juxtapose the hotel’s front door against these posts in an incongruous manner. I stood at the top of a stairway and exposed the photograph so that the lower story vanishes into abstract darkness. The hotel’s doorway now seems to be suspended in air above it. I shot numerous people passing through those doors, and when these men left the lobby in tandem, I rhythmically related their upright posture to the row of red vertical posts that fill much of the image behind them. They walk from out of the lobby’s red zone into the green zone of an Arizona morning. To them, it is just the simple act of leaving a building. But to the viewer of this image, it becomes a journey from one world of color into another.
9 comments leave a comment 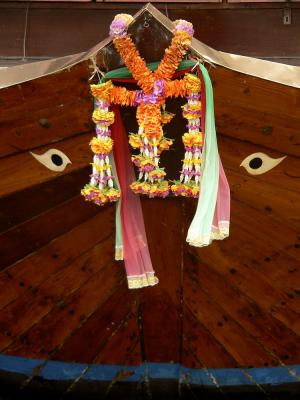 Bow Eyes, Bangkok, Thailand, 2005
During our brief stay in Bangkok prior to visiting Laos and Burma, I made this image of a decorated rice barge because of the way its colors work as expression. I include four different zones of color in this image. The predominant color is a deep reddish brown, the color of the hull itself. It is accented by a subtle blue stripe at the bottom, with handsome copper trim at top and also functioning, as the two incongruous “eyes.” And finally, there is the vivid mass of colors in the Thai decorations that hang from the prow. It is as if an exotic headdress has been draped over the forehead of the barge. All of these colors add up to express a sense of celebration. And that is what this rice barge is now used for – carrying visitors up and down Bangkok’s Chao Phraya River every evening and serving them festive dinners of Thai delicacies. These colors fit both its mood and mission.
1 comment leave a comment 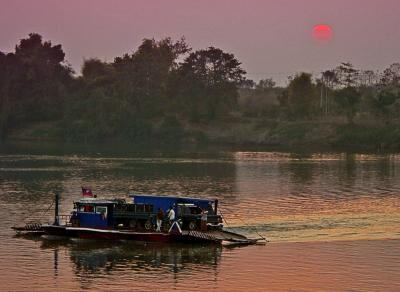 Mekong Car Ferry, near Khone Island, Laos, 2005
There comes a moment on the Mekong when the sun becomes a red ball hanging low in the sky, and the muddy river turns from brown to a pinkish orange. This is such a moment. To make it work as expression, however, I needed more than the coloration, which created the atmosphere and lent an emotional tone to the image, but did not tell a story in itself. This lumbering old car ferry, however, did express a sense of life on the great river. Flying the Laotian flag, the ferry is really a barge – a floating platform that barely holds a few cars, motorbikes and cyclists. It is engulfed here in world of shimmering colors that reflect the passing of day and the coming of night.
4 comments leave a comment 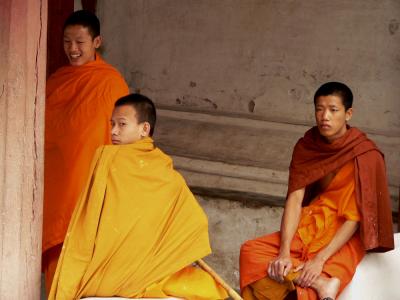 Poor Men in Rich Robes, Luang Prabang, Laos, 2005
These monks seem well aware of the vivid colors their robes bring to this most beautiful of all Laotian towns. The interplay of yellow, orange, and maroon here arrests the eye, and speaks volumes about the men who wear these colors, many of them for the rest of their lives. They may own nothing but three robes, a razor, a strainer, a belt, and an alms bowl for their daily meal. They must also vow to injure or offend no one, and remain celibate. These monks will live spare, lean lives. As compensation, however, the colors of their robes radiate energy and beauty. They may live in poverty, yet dress in the richest of colors.
7 comments leave a comment