First bird back was caught on camera visiting the Radisson Hotel in downtown Winnipeg March 10th. Then spotted and reported by "Ballywing" one of the many spotters March 11th. at 11:50 am. Well done Ballywing ! 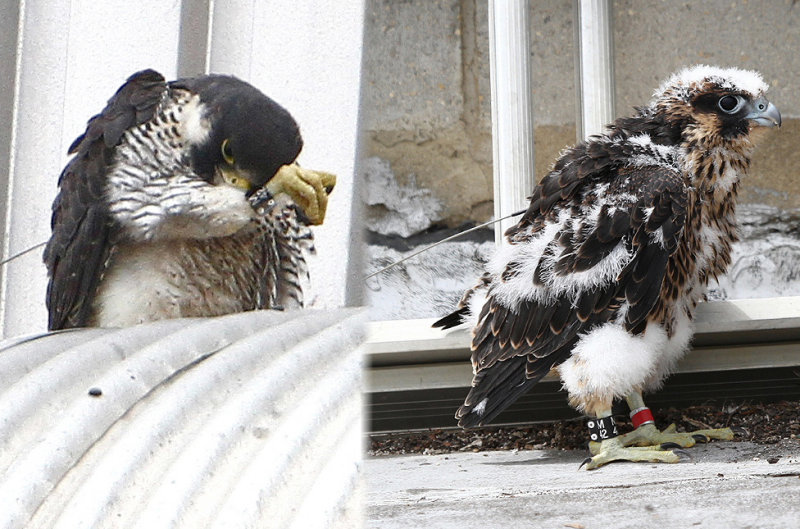 Kelly...then and now
Kelly - M/42 was hatched in Brandon Mb. 2013...has showed up North of Winnipeg this spring. She was also one of the transmitter birds. http://www.pbase.com/photosbydennis/transmitters_2013
1 comment leave a comment 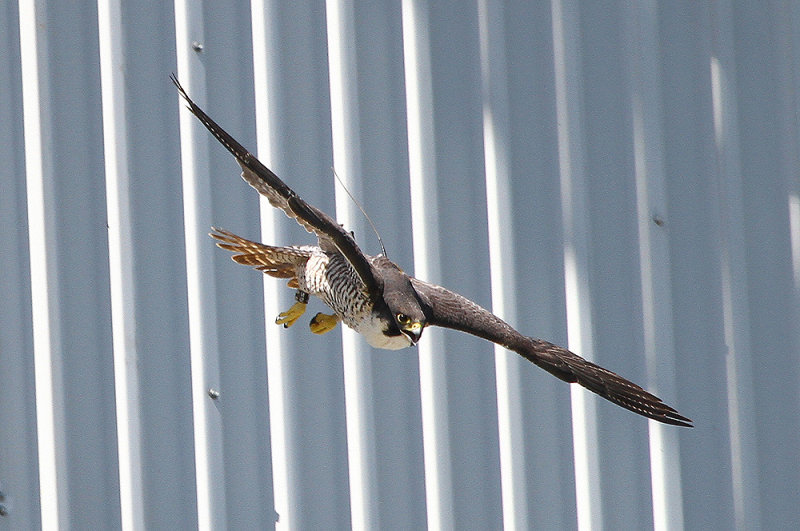 Kelly
Kelly - M/42 was hatched in Brandon Mb. 2013...has showed up North of Winnipeg this spring. She was also one of the transmitter birds.
3 comments leave a comment 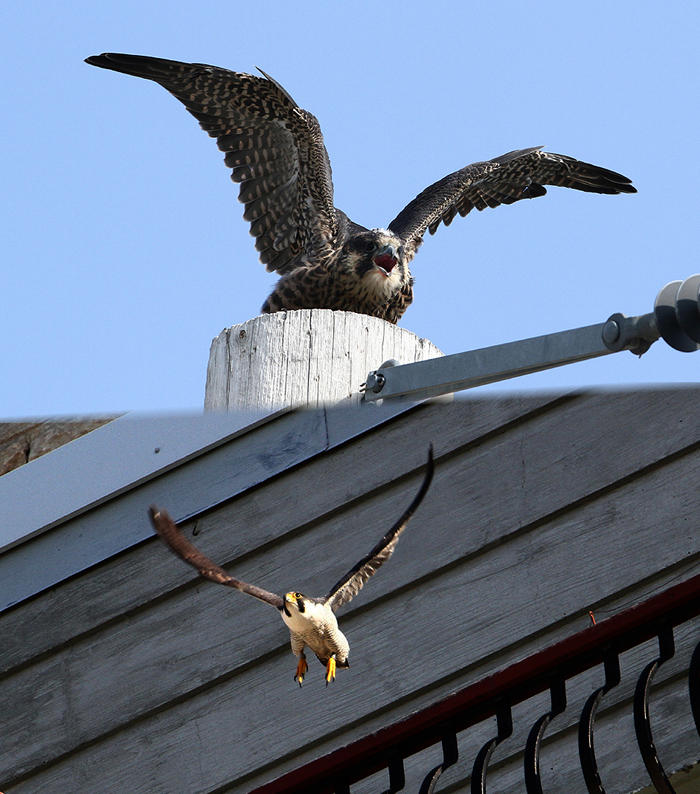 Daer...then and now.
Ty and Paris first nest that we know of was in Selkirk Mb. in a crows nest on the Shaw communication tower 2012. Only 1 of the chicks had been banded and named Daer, D over 23...D/23
Daer has returned and has been spotted in Winnipeg with a unbanded female.
2 comments leave a comment
Logan Birds 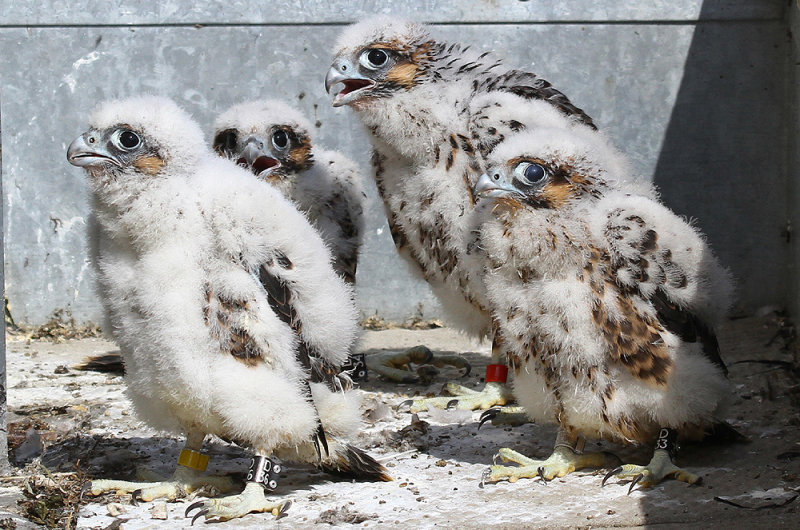 Hart & Joli have returned and staked their claim on the Logan territory...they have a few locations that they like to perch on and can be difficult to find at times. 4 chicks banded at this location. Male - Silver Band - D/33 Male - White Tape - D/34 Male - Red Tape - D/35 Male - Yellow Tape - D/36
1 comment leave a comment
West Wpg. 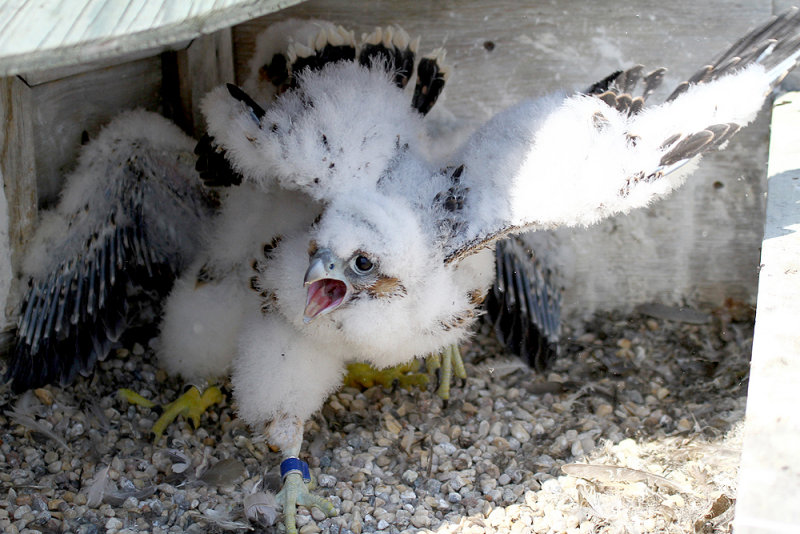 A shake up on this territory...Beatrix returns and appears to be paired up with Ty. This could all change if Beau returns, we'll have to wait and see what plays out. It's now known that Beau had in fact returned and it's believed that with his arrival perhaps had a altercation with Ty at the West Wpg. site...he's currently being treated for his injuries and then to rehab. Will have to wait and see how his recovery goes. 2 chicks banded at this location. Female - Silver Band - M/52 Female - Blue Tape - M/53
0 comments leave a comment
Radisson Hotel 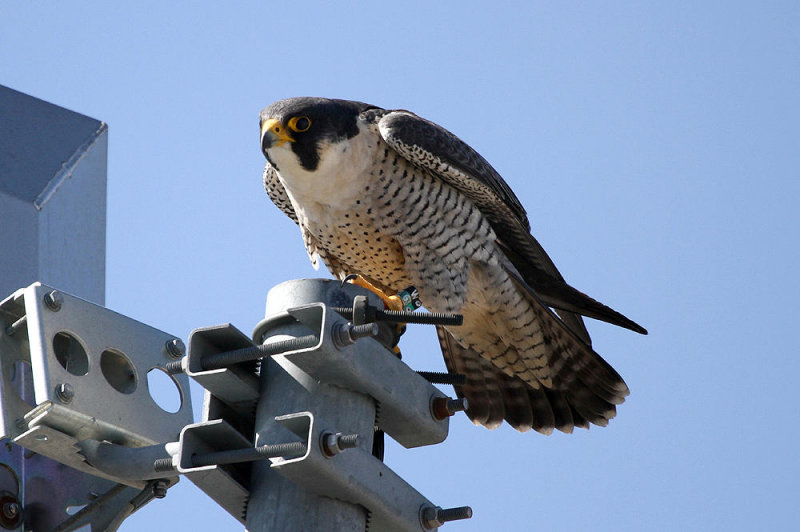 It appears that we have lost the eggs May 17th. - 18th. due to bad weather...after 15 hrs. of rain on the ledge, the drain couldn't take away the water fast enough. We'll keep an eye on them to see what happens. Princess & Smiley have returned to the Radisson Hotel in downtown Winnipeg...appears that they have choose to nest on the East side ledge of the hotel, since she has laid her first egg ( April 14TH. ) Confirmed as of April 20th. that we have 3 eggs and incubation has started...hatch date 18-22 of May.
0 comments leave a comment
McKenzie Seeds...Brandon 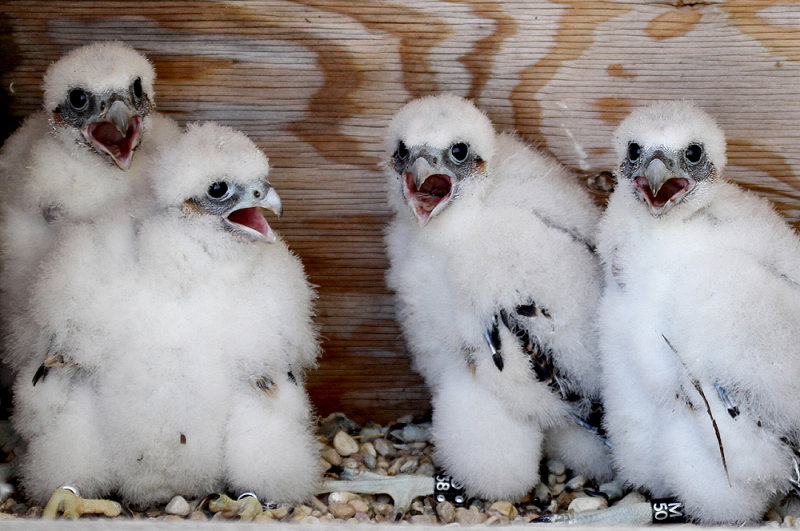 Banding took place June 23rd. 4 chicks banded...2 male and 2 female. Should be up and flying in a couple weeks.
0 comments leave a comment 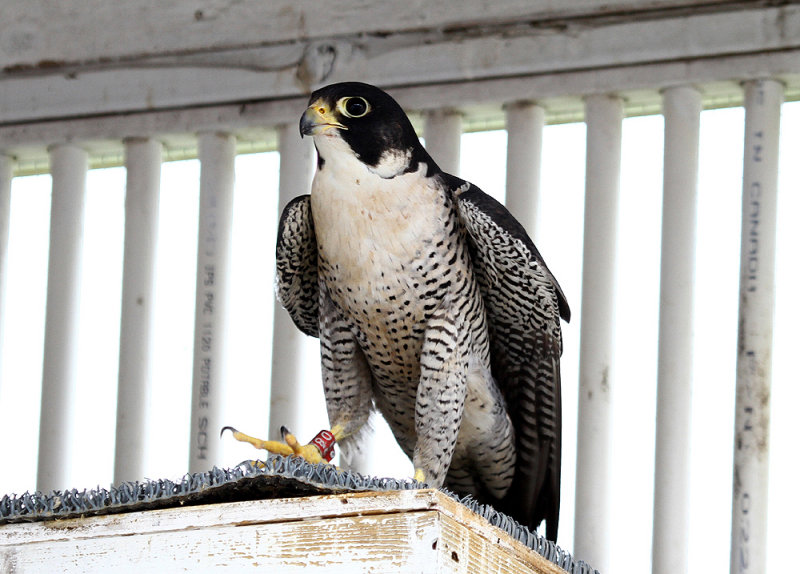 Beau
Due to the extent of his injuries it appears that Beau is unable to be released back into the wild. He's now in a good home and appears to have a mate. He will finish out his years here and hopefully over this time will produce many young.
2 comments leave a comment 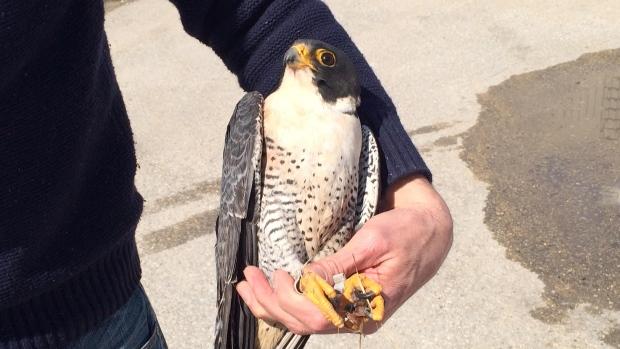 Beau
It was a rough homecoming for a Winnipegger fresh off his migration home from Mexico.
Beau is a peregrine falcon that took refuge at the Canadian Mennonite University on Monday. Paul Friesen, a librarian at the school, came across the bird in a parking lot, injured and unable to fly.
"I've seen them in the air and perched on buildings and that sort of thing but never up close like this. It's a gorgeous bird. It's awe inspiring," Friesen told Ismaila Alfa on CBC's Up to Speed.
The falcon suffered from wing fractures and could not fly.
"We tried not to get too close to it," Friesen said. "At one point we wanted to get a better look at it from the front, then it scurried off across the grass a little bit. While we were waiting for [a conservation officer] to come, we decided to put a cardboard box over it to help protect it and and try to calm it down a bit."
The bird stayed in its box for about an hour until someone from Manitoba Conservation could come and rescue the bird.
Beau's back story
Tracy Maconachie, the coordinator of the Manitoba Peregrine Falcon Recovery Project, was contacted by Friesen after he found the injured bird.
"It's not the first call I've had about a downed bird over the years," she said. "The first thing is: lets make sure it's a peregrine. And he was very specific, as soon as he said there are bands on his legs and the size of a crow, that's a pretty good indication that it is a peregrine."
Then she says, the next step is to see who the bird is and if it's injured.
The tag on Beau's leg makes it easy for Maconachie to know more about him. For starters, he was born in captivity but released into the wild in Manitoba back in 2007.
Maconachie explained that Beau was the west Winnipeg resident male and he had been since 2010.
"Now we knew he wasn't going to be the resident male this year, he had been supplanted already by a young male that's been hanging out in Selkirk for the last couple of years," she said.
One can speculate that this was the culprit that injured Beau in the first place.
"He's a really cool, laid back kind of bird, takes everything in stride, knows how to provide for his family," said Maconachie. "We're hoping the prognosis is good, but it's always a little dicey with birds."
Maconachie says Beau has some small fractures in his wing, which aren't too serious — but also has some lacerations on his breast which will require surgery and rehabilitation.
"He'll be assessed to see whether or not he's capable of living on his own in the wild safely," she said. "If not, we'll find a placement for him if need be in a captive facility."
Maconachie isn't alone in hoping for a good outcome.
"One doesn't like to see a bird that's been injured. Hopefully it will survive and live to catch lots of pigeons in Winnipeg," said Friesen.
Hopefully Winnipeggers will be seeing Beau again soon when the Falcon Cams come on in mid-May.
1 comment leave a comment