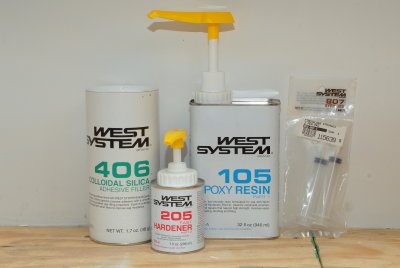 The Epoxy Supplies
Most all boats have some sort of "core" in the decks. Whether it's balsa, plywood or some of the foam cores all can eventually absorb water from a leaking deck penetration. A leaking deck, especially with wood cores, can lead to core rot and eventually delamination of the deck and loss of structural rigidity. Sailboats especially can have hundreds of holes drilled into the deck for cleats, stanchions, blocks, winches, genoa tracks or many other mechanically fastened and through bolted or screwed items.

Unfortunately most builders do not take the time, nor have the patience, to protect the core from moisture. Most all builders also fall short in their bedding techniques, choosing in favor of time over lost profit. The "can't be seen, must not be there" mentality certainly rings true in the category of deck hardware installations.

The re-bedding of deck hardware is a time consuming task but one that can save your five, six or seven figure vessel from loosing 25% to 50% of it's market value due to saturated and rotted decks.

There is no method better than "potting" the holes with thickened epoxy to prevent core damage if you have core where hardware passes through. This job is easy but time consuming. Once done correctly you will never have to worry about water getting into your core again.

These are the epoxy products I use to "pot" deck holes. I generally use System Three Epoxy products but for this I used West System because its very easy to find and use. I use a #205 hardener #105 resin & Colloidal Silica or "Cabosil" as the filler or thickening agent. In order to inject the resin into the holes I use the West System syringes. 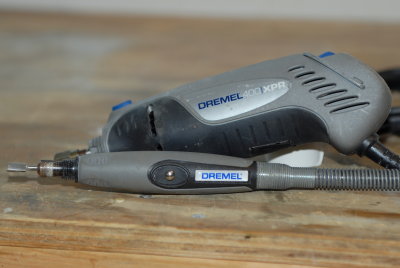 A Dremel With Remote Wand
A deck core is a sandwich of fiberglass skins laminated to a foam, balsa or plywood core. In order to "pot" a hole you must first remove a small amount of core from between the skins. I often read of the "bent nail and drill" for this task but it's not a pretty or an easy task. I sometimes question whether the authors and folks recommending this practice have actually ever tried it, but I digress.

While I have chosen to illustrate this using a balsa core you should be aware that most builders do not use foam or balsa directly beneath high load deck hardware. More often than not you'll be dealing with marine grade plywood under deck fittings. Plywood can handle the compression loads far better than either balsa or foam cores and this is why it's laminated into the deck beneath deck hardware. Plywood is hard to carve out, comparatively speaking, and one more reason why the bent nail trick is not as easy as some would make it seem.

The easiest way to remove core from between two skins, that I have found, is with a Dremel. I also advise the use of the "magic wand" as I like to call it. This flexible extension gives you artist like finesse and makes the job of removing core material significantly easier. Dremels are cheap these days and I can't imagine owning a boat without one especially when potting deck core penetrations. 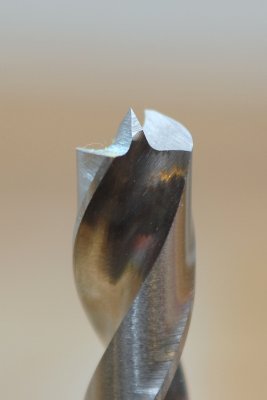 Brad Point Drill
When drilling into fiberglass the proper tool is a must. This is a brad point drill and it will create a clean, no chip hole in gelcoat provided you use a few tricks. 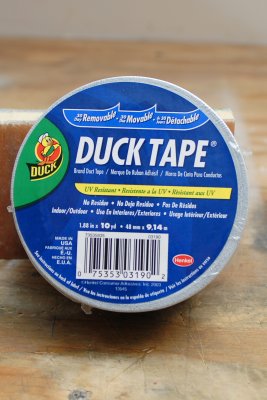 Tape For Sealing The Underside of The Deck
This is one of my favorite marine duct tapes. It's a UV stabilized, white in color, heavy duty duct tape made by Duck brand. It is hard to find but I have found no better duct tape, in white, that is also UV stable for use on a boat.

I use often use this tape to seal off the underside of the deck. This prevents the epoxy from dripping into the cabin. Gorilla brand duct tape is even better for this as it is even more adhesive than the Duck brand. 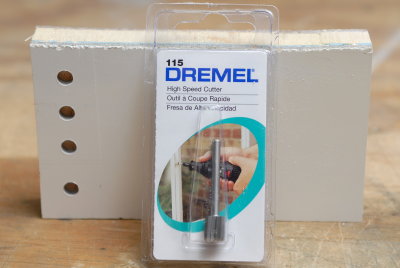 Dremel Bit #115
This is one of two bits I use to remove the core. It is a 5/16" diameter head with a 1/8" shank. It allows a perfect amount of core removal to seal the deck from moisture. 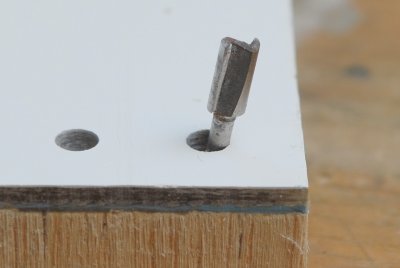 I should mention that I personally prefer to leave as much of the top and bottom skin in place as is possible. Much of the strength of the deck comes from these skins so leaving them intact when potting hole is what I consider a good practice. Leaving the top and bottom skins intact, without over drilling all the way through both skins, leaves you with a "captured plug" of epoxy that can't physically pop out or break free as easily as a complete over drill of both skins can. A number of years ago I set up some destructive testing in my own shop to see which was stronger. While both are strong I found the captured plug to be stronger.

Either method is arguably far better than what the builder did, and that is not sealing the core at all. Don't fret over the method just chose one and do it before it's too late. 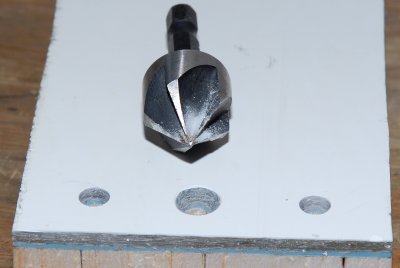 Enlarging An Existing Hole
In order to complete this article I used a scrap piece of end grain balsa deck structure. I wanted to use a scrap piece so that I could make cut-a-ways to show the inner workings and what actually happens on the inside of the deck.

The center hole, as you can see, has been counter sunk. This was originally a 1/4" hole that I over sized to 5/16" to make the #115 bit fit into it. Over sizing holes in fiberglass can often result in an "oops" and some serious deck chipping.

So here's the trick to over sizing holes:

#1 Pre-countersink/chamfer the hole to just beyond the width of the drill you will use for the over sizing, in this case 5/16". If your countersink bit is new and sharp get in the habit of using reverse, not forward, when countersinking fiberglass. Forward will remove too much material too fast if you are not careful.

#2 Place your brad point drill in the chamfered hole and use reverse. You will cut through the top skin only and have a nice clean hole. You do however need a brad point drill set. You won't find them at Home Depot and will find them a Rockler or on line. This is the quickest and cleanest way to bore the top skin without the drill wandering or causing serious gelcoat chipping! 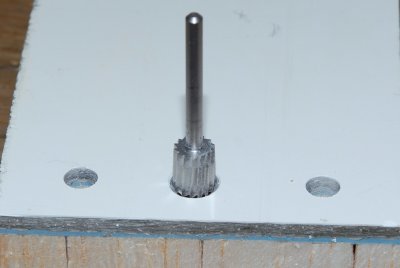 Bit Fits
As you can see (click image to make it bigger if you can't) the 5/16" head of the Dremel #115 fits into the recess created by the countersink. I have purposely created a little extra room with the countersink to 100% avoid edge chipping. 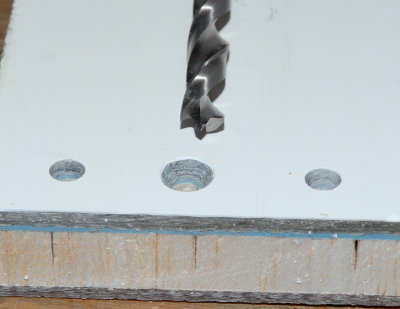 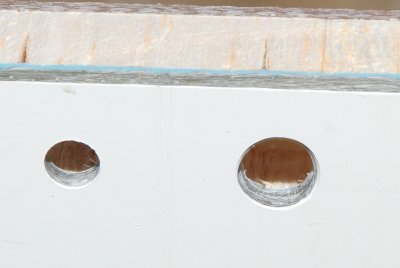 Clean Over Sized Hole
This image shows the 5/16" over sized hole, and the original 1/4" hole on the left. The new bigger hole is just as clean even though there was no "center point" to start the drill with.

At this point I have removed the core with the Dremel and you can see the cavity it created if you blow up the photo and look close.

When using the Dremel to rout the core away make it a practice to insert the head of the bit into the deck before turning it on. Once turned on use the bits shaft as a guide and work your way around the hole moving up and down and around the circumference of the deck hole to clean the core material from the the skins and to make a nice, even, round cavity for the epoxy to seal the deck.. Make a few passes and suck any dust out with a shop vac. It takes all of about 10-20 seconds, per hole, once prepped and ready for it.. 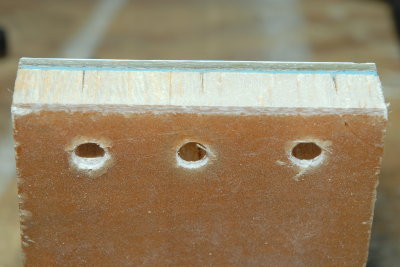 Bottom Holes
This photo shows that all the holes below deck are still 1/4" even though the middle hole has a 5/16" diameter on the decks surface. This leaves as much of the deck skins intact is as humanly possible. 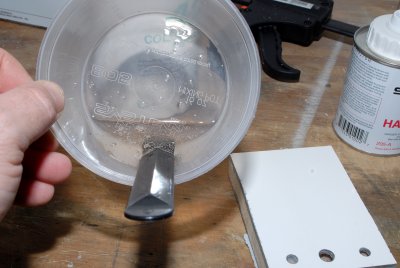 Mix Epoxy
Now that the core has been routed out with the #115 & #654 bits it's time to mix some epoxy. With West System they use metered pumps. Until you get good I don't recommend partial pumps. The mix ratio is a one pump hardener to one pump resin ratio. You will have about 20 minutes of pot life using the 105 resin and 205 hardener at temps in the low to mid sixties, which is plenty. At room temp, 72 degrees, you'll have 9-12 minutes of workable pot life.

Epoxies kick off faster when it's warm and slower when cold. If working in colder conditions remember that it will become more viscous and tougher to work with especially when you need it less viscous to fill deck holes.. For more info on using West System epoxy visit their great and informative web site.