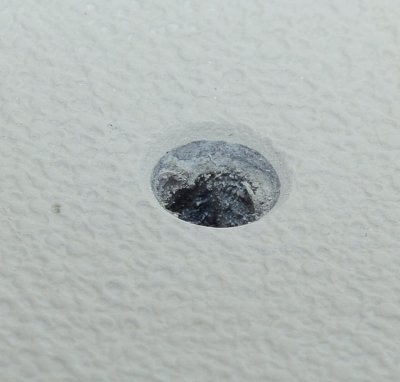 Countersunk/Beveled Hole
Over the years, especially in the last few weeks via PM's/emails, I have been asked how I bed deck hardware with butyl tape. I officially apologize for being so slow with completed photo examples. I have been meaning to do one but just have not had the time to complete it.

Late one night I was in the barn staring at a cleat, and a small scrap of clear Lexan, hmmmm...... A drill, counter sink, some butyl tape, my camera and a few minutes later I had the pics I needed. Sorry it took so long it just needed to "click" the way I wanted to present it..

Here's how I bed with Bed-It Tape:

Step 1 - Countersink the deck holes slightly and then clean everything with Acetone or a similar fast evaporating solvent. 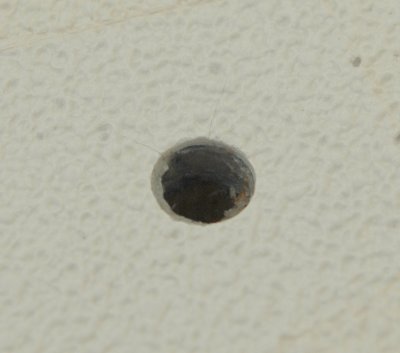 Spyder Crazing Due To Lack of Beveled Edge
If you click this image and make it bigger you will see two spider cracks radiating out from the drilled hole in the deck. If this hole had been beveled/countersunk this would likely not have happened. The big money builders learned this trick a long time ago. 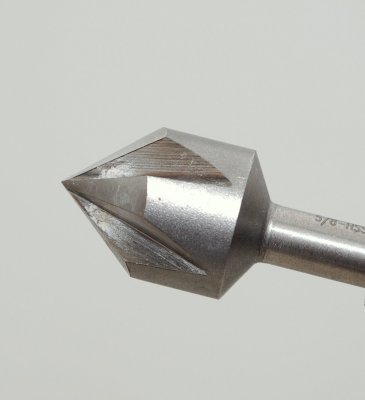 5/8" Countersink Bit
So why on earth do I countersink or chamfer the deck side of the skins?

#1 It does a lot to prevent gelcoat crazing. By feathering the edge of the gelcoat, through the use of countersink bit, you are now a lot less likely to start a crack or craze mark in the gelcoat. Gelocat is an un-reinforced product and because of this its prone to cracking. Sharp right angle holes are a good place for these cracks to begin when you tighten the deck hardware and potentially flex the substrate. Beveling the edge of the hole or feathering it limits the ability of the crack to begin or start. This is why you often see holes drilled into plate glass that will have beveled or rounded edges too.

#2 By creating a bevel or countersunk recess in the surface of the deck the marine sealant or butyl tape has a cavity to fill. Without a bevel the hardware would compress the sealant to about 1/64th of an inch thick after the fasteners are tightened. Marine sealants do have some flexibility but not as much as you would guess. Follow me for a moment; Let's say you have a marine sealant that has a rating of 400% elongation before break on a 1/64" thick joint. Simple math shows you that 400% of 1/64" is only 1/16" of total allowable joint movement before a joint failure or leak starts. In the case of a stanchion base 1/16" is not much allowable movement before failure.

#4 Countersinking is a no brainer and has many many benefits. For instance, you can install the fitting and tighten it down NOW with no waiting and you can seal deck hardware alone.

I am going to inject some strong opinion here so please move on to the next photo if you don't want to hear it.

I truly dislike the Don Casey "two step", "wait to tighten until cure and form a gasket" method of bedding deck hardware. Believe it or not, I'm not a conspiracy theorist. I do however feel as if Don wrote that technique to guarantee boatyards future revenue. (grin & wink) This is NOT to say that it can't work though. It certainly can and does work. The problem with the two step method, using a marine sealant, is this;

Can the average DIY or yard employee get repeatable results that are reliable and consistent? The answer to that is very often no.

This is NOT about the idea of forming a layer of sealant between the fitting and deck being a bad idea, but rather about the EXECUTION and installation which can be very difficult to perfect and get repeatable results.

Think about it. If the sealant cures, to form a "gasket", and you then move the bolt while tightening it down on the "second step".... It can break the seal and leak... If you create a gasket too thick, and then can't get the mechanically fastened hardware tight enough against the deck, because of compression resistance, the hardware will move, and the sealant will eventually fail, so again, it can leak. If you don't let the material "kick" just right, which is very difficult to predict, it can all squeeze out and again it can leak.

Honestly, I mean no disrespect to Don Casey, he is a great guy and he writes excellent, excellent articles and books that have helped many thousands of boaters. Sadly that method is flawed in execution something that is very hard to predict. The two-step forma gasket method is one of the most difficult procedures to properly execute that I've read in any sailing/boating related book especially when applied to the average DIY attempting it.

On another note Don Casey has recently recommended using butyl tape. This was in a boat US article and he even weent so far as to link his Boat US article to the article you're currently reading.. Marvelous!!!

Sadly I have witnessed far too many cases of core rot due to the DIY & professional "two step" bedding procedures than I would have liked to. The big problem is that these sealants are moisture cure and you really have no way to know what state of cure they are in. The edges of a fitting may be at the right state but the middle of the fitting still wet & unchanged. Getting even cure distribution is extremely difficult.

With Bed-It Tape it is more "one step" because the consistency of the product is not changing and all your doing it tightening slowly, over time, to let it "displace" out from under the fitting.

So where did I lean the countersinking method? I learned this from a worker at Hinckley Yachts back in the 80's. Morris, Sabre and other top quality builders have known this secret for years but many of the big production builders are still either too cheap, or just don't know about it. This extra step takes all of about 30 seconds per deck fitting but apparently it's too much "extra" work for most builders. 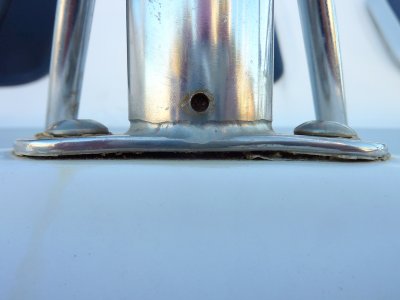 Marine Sealant Failure
Here's a prime example of where the 1/16" of movement might make a difference. This is a stanchion base on a major production sailboat that was only two years old. The factory marine sealant, made by 3M, has failed and caused a void when the stainless plate flexed and bent.

This is another reason I prefer cast stainless or aluminum stanchion bases as they do not flex like plate stainless does. On top of the stanchion base bending this manufacturer also does not countersink the deck holes, which in this case resulted in wet deck core in under two years! Had the deck penetrations been properly countersunk there is a very high probability that this leak never would have occurred despite the cheesy quality of the stanchion base.. 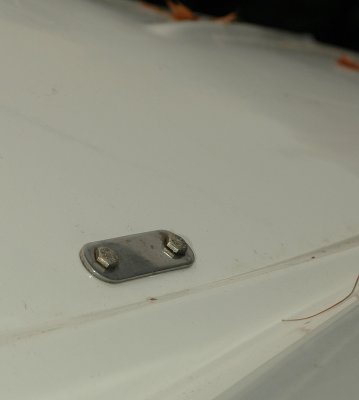 Lifting Eye Backing Plate (outside the boat)
If by chance you're reading this and are still not convinced about countersinking, this is a lifting eye I installed in 2002 for an inflatable RIB dinghy. To do this install all I did was bevel the outer hull with a countersink bit, clean the surface with acetone and install the fitting with 3M 101 polysulfide, tightened it down ONCE and cleaned up the goop that squished out.

This fitting has been bone dry for nine years and resides below water, as in COMPLETELY SUBMERGED, when the dinghy is floating. 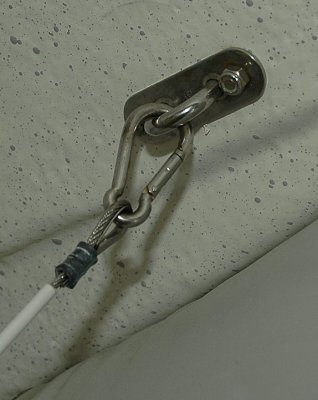 Lifting Eye (inside the boat)
If you're still not convinced in the utility of countersinking the holes in your deck this photo was taken at year 8 of these pad eye's being installed and they still exhibited ZERO leaks and are still 100% bone dry.

While you probably could use butyl below water I don't and use marine sealants instead such as Sikaflex 291 or a Polysulfide. 3M 101 is no longer marketed so you are left with Boat life Life-Calk as the sole marine grade polysulfide. I never liked Life-Calk as much as 3M 101 but it's still better than devils glue, AKA 3M 5200.

This is EASY! Countersink, clean, tighten & clean up.... Done! 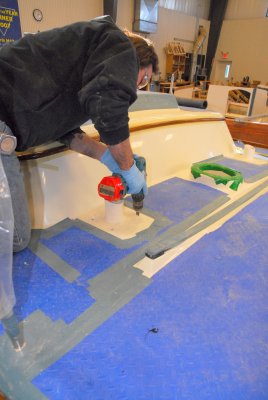 Morris Yachts Countersinking !
Okay, okay still not convinced? Here's how the pro's do it. I took this photo at Morris Yachts of a brand new Morris during the deck hardware installation. These four holes are for the Dorade box on an M-36.

It is utterly reprehensible to me, in this day and age, that the production builders are so bent on saving 2˘ that they won't take the extra 30 seconds needed to properly install deck hardware. It took this Morris Yachts craftsman less than 30 seconds to bevel these holes, including installing the countersink bit into the drills chuck. 30 seconds!!!!!!

How many Pearson, Catalina, Hunter, Beneteau or other mass produced boats do we see or survey annually with wet decks? LOTS!!! How many Morris, Hinckley or other top builders using proper installation methods do we see with wet decks. Hardly any.. Hundreds of thousands of boats with wet core over 30 extra seconds per fitting, if that. Ridiculous really... 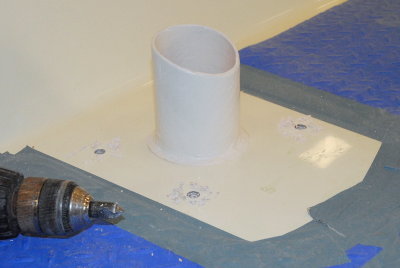 A Close Up
Four properly countersunk deck penetrations on a brand new Morris. 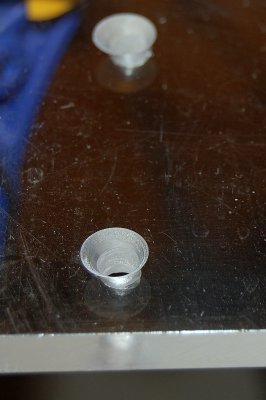 Also Beveled The Lexan
Okay, back on track.. For this illustration I also slightly beveled the piece of polycarbonate: 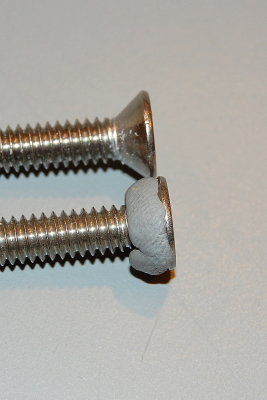 Wrap Heads With Butyl
Step 2 - Wrap Bolt Heads - You'll want to rip off a small piece of butyl and knead it into a string then wrap the underside of the bolt or machine screw head. 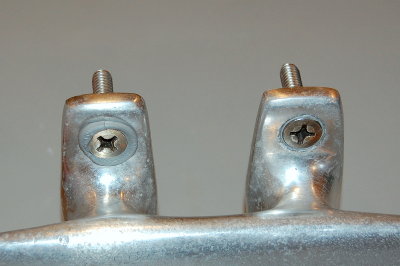 Press Into Deck Hardware
Step 3 - Press the through bolts into deck hardware with some good pressure.

Gelcoat silicone contamination is a whole other subject for a whole other day. Please avoid silicone except for certain tasks involving plastics that require its use. 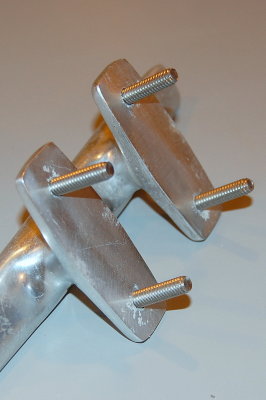 Flip Deck Hardware
Once the bolt heads are wrapped and pushed through flip the hardware over.