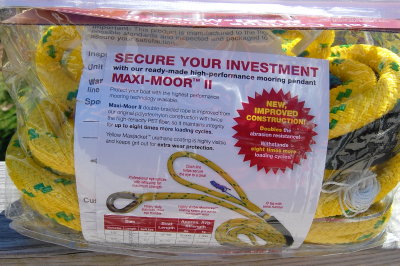 Over the last few years I have been repeatedly asked how I handle my mooring pendants. This article is about how and why I use the methods I use. There are many ways to skin this cat but after observing & photographing mooring system failures, for close to 38 years, I have come to my own findings and choose what I do based on my own evidential findings. Myself and my family have had boats on moorings for nearly 40+ years. In that time we've never lost a boat to a storm and never parted a single pendant to chafe. We've come close but always had a second to back it up.. PPPO!! Proper preparation pays off.

Let me first say that I am a strong proponent of dual UNEQUAL LENGTH mooring pendants. However, done incorrectly, dual pendants can cause more harm than good. The methods in which they are laced together and installed and connected to the system are critical to the performance outcomes. Others whom I respect greatly, such as Wayne Hamilton the Searsport Maine Harbor Master, and owner of Hamilton Marine, believe in only one pendant. You could not pay me to lay our vessel to one pendant, but Wayne does..

Wayne and I disagree on this and I will go into detail to explain where my beliefs stem from so you can make your own educated decisions.

The mooring pendants I choose to use are made by Yale Cordage right here in Maine. They are time tested, proven and extremely durable. They are made of a nylon jacket with a polyester PET core and then treated with a proprietary MaxiJacket coating to resist marine growth grit.. They also utilize stainless steel thimbles, which don't rust and abrade the pendant, have a chafe sleeve. The Yale brothers take this stuff seriously, so seriously that each pendant has a traceable serial number!

Hands down The Yale Maxi Moor brand of pendant are the most tested and proven mooring pendants made. You can buy less expensive pendants, but not the same pendant as a Yale Maxi-Moor II... 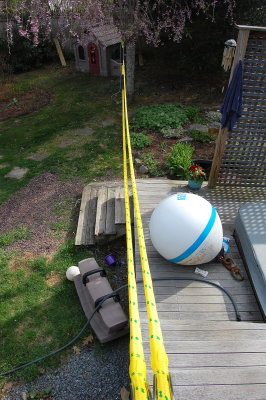 In this next series of photos I am going to go through the steps I have been using to lace mooring pendants for nearly 30+ years. In that time not one failure or incident has occurred nor damage to the pendants from the lacing. The process of lacing is critical in that you don't lace them too tightly.

#1 Lay out the pendants parallel to one another and stretch them so you can work them easily. I use the deck and the fence in our yard to do this. Here they are ready for lacing. 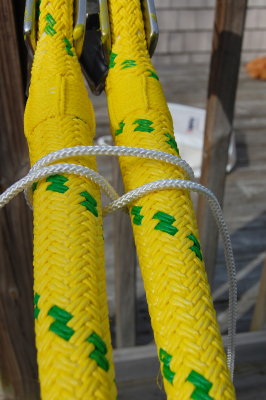 #2 The lacing begins as close to the thimbles as possible. This keeps the thimbles from "hockling" and interfering with each other on the shackle.

#3 Begin the lacing by starting your first figure 8 around the two pendants. Do not snug this tightly. The number of figure 8's you do around the pendants will hold the toggle buoys in place without being too tight. 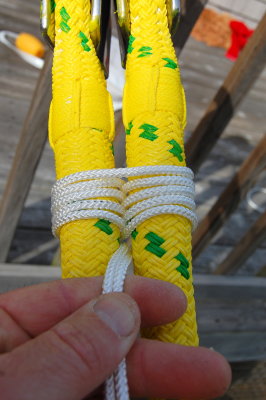 #4 Continue the figure 8's until you have at least 5. Remember do not do this too tightly. End your 8's with the two lacing lines in between the pendants. 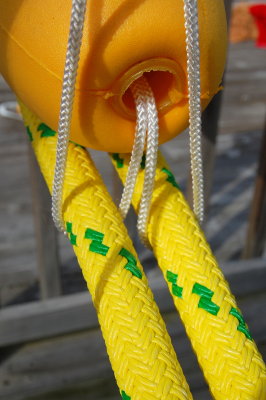 #5 Grab your first toggle buoy (Hamilton Marine stocks them #729314)and run the two lines through the center and again begin figure 8's on the other end of it. 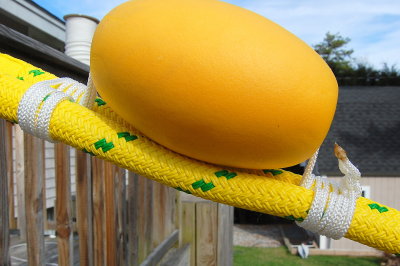 #6 Tie off the end of your figure 8's using a square knot then melt the two ends of the line together. Remember none of this is done tightly. The Chinese Finger Cuff action of the figure 8's holds the toggles in place without impeding the pendant. They ride loosely on the double braided outer jacket. 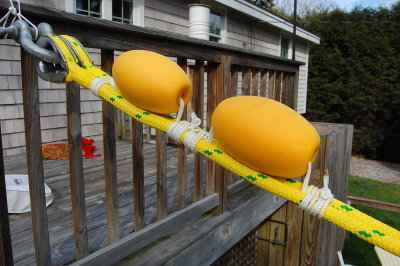 The First Two Are Close Together

These two toggles are critical and they help to nearly eliminate the pendants wrapping around the chain, as is seen so often in mooring fields. These two toggles need to be able to "float" the weight of the thimbles and shackle, as you will see later on. 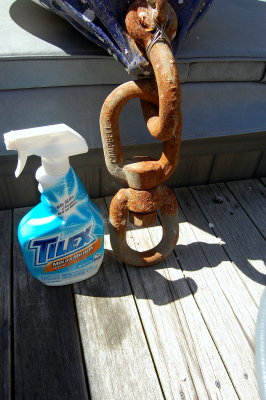 I mentioned the swivel earlier and here it is. A swivel is a critical part of any permanent mooring system. In Falmouth, Maine it is an enforced ordinance that you use a swivel.. They are also one of the biggest weak links in any mooring system.

Because I know swivels are weak links, & wear items, I purposely use over sized eye to eye swivels. This one is made by Campbell and was purchased through Hamilton Marine (#106233). These are not the cheap Chinese imposter products that have flooded the US market, they are high quality load rated swivels made right here in the USA. If I recall this is a 1" swivel and it still gets replaced every 2 to 3 years. 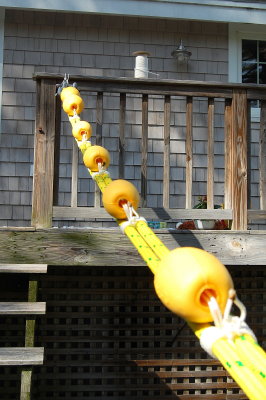 All Laced Up & Ready For Install

#8 You want to lace about 8-10 feet from the ball so when you leave the mooring the lazy end of the pendants does not wrap the chain when you're gone. I have yet to come back to a tangled pendant using this method but it could still happen, in the right conditions, anything is possible with boats. 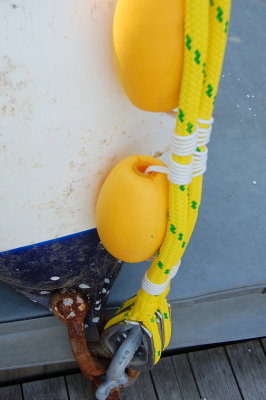 As can be seen here the pendants are attached to the top of the swivel and the toggles face the ball. I install it this way because the ball can attract hard growth which could chafe the pendants. By placing the toggles up against the under side of the ball they see the wear, not the pendants. 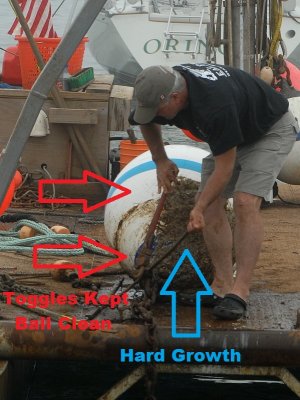 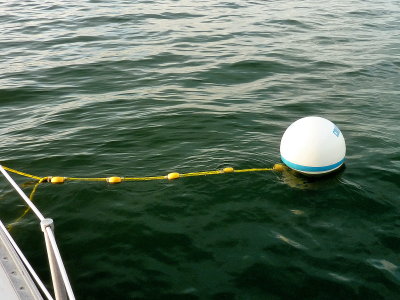 So just what does this actually look like in the water? Here you go.

As can easily be seen in this image the toggles are keeping the pendant shackle oriented up and the pendants / toggles ride nicely against the under side of the ball. Done properly they will stay this way indefinitely, not droop or hockle the shackle around the swivel or chain.