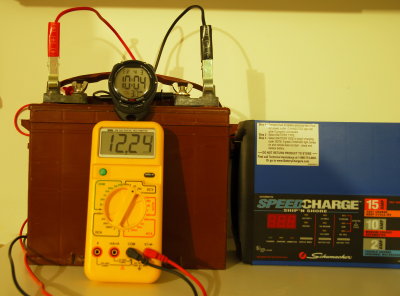 Resting voltage Fri 10:04 P.M. / 12.24 Volts
I have seen the discussion ensue many times where folks say they monitor their batteries state of charge (SOC) via a volt meter. While this can be quite accurate when the battery has been allowed to come to a resting voltage, the reality is that when you are on the boat, and cruising, attaining a 4-12+ hour resting voltage can be very difficult if not very inconvenient.
I wanted to do a photo/time/voltage experiment to illustrate why using a simple voltage test on a boat may not be the most accurate way of checking the resting voltage of a battery especially with short resting times.

Here is what Trojan Battery says about using open circuit voltage testing of state of charge:

"Open Circuit Voltage Testing - This is the least preferred method of evaluating the performance of a battery.

• For accurate voltage readings, batteries must remain idle at least 6 hours (but
preferably up to 24 hours)

In order to check the state of charge (SOC) on a lead acid battery the battery should have rested, meaning no input voltage/amps or output/loads, not even the stereo memory, for a considerable amount of time. If the battery is not allowed to rest, and you have recently run the engine, or had a load turned on, the SOC will not be accurate for many hours, but accurate is a relative term because as Trojan Battery says "least preferable method".

To conduct this illustration I used an elcheapo bench charger, stop watch, temperature and a DVM. I set my camera up on the tripod and photographed the battery over 24 hours.

The battery, a Trojan group 24 deep cycle, had been on my bench and drained to about a 60% SOC. It then sat for a week before I took my baseline SOC reading. The resting voltage was 12.24 volts or about 60% of charge according to Trojan Battery. I then plugged in the 20 amp charger for about 130 seconds and then unplugged it.

This was only 130 seconds of charging and it affected the resting SOC for at least 11 hours and was off by about 10% even after sitting for 11+ hours.

NOTE: This battery was not "new" it was certainly broken in and used. It was also suffering from some effects sulfation hence the rather quick rise in voltage. This battery was chosen to represent the "average" condition battery I see out in the real wold of boats.
The reality is that healthy batteries are affected similarly. 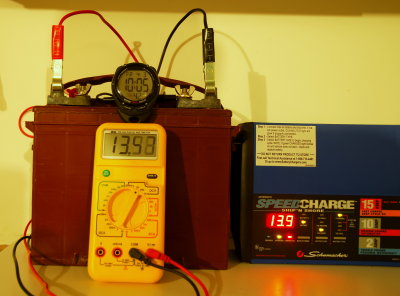 Voltage on the rise. 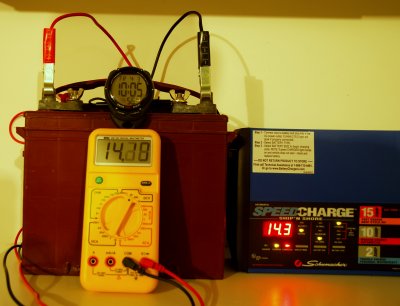 Within 14 seconds the voltage had already climbed to 14.13 volts. (Note: I am using the DVM as terminal voltage not the horribly inaccurate elcheapo charger)

Please note that a "healthy" battery will not see a rise in voltage like this one did. The reason for this quick rise is caused by the effects of sulfation. 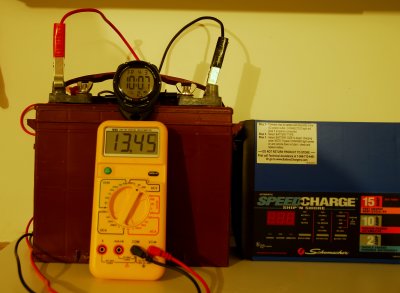 Charge Shut Off At 130 Seconds
I had unplugged the charge at roughly 130 seconds and the voltage was already dropping back to 13.45 volts at 10:07:15 which was 1:57 seconds from where I turned on the charger: 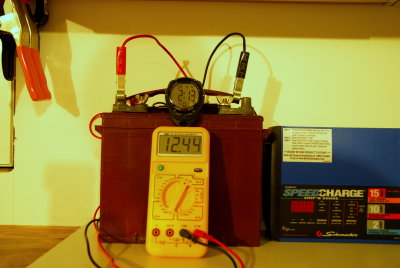 Next Photo 2:13 A.M. Saturday
I took the next photo on Saturday morning at 2:13 A.M. a little over four hours after turning off the 130 second charge. The voltage still read 12.44 volts or roughly 76% state of charge. 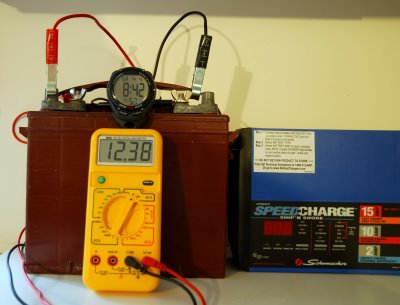 Next Reading 8:42 A.M. Saturday Morning
Unfortunately I fell asleep and did not take the next photo until Saturday morning at 8:42 A.M. when the voltage still read 12.38 volts or roughly 70% state of charge. Based on my calculations the battery should still be at about 12.24-12.25 resting voltage based on 130 seconds of charging and what went into it. 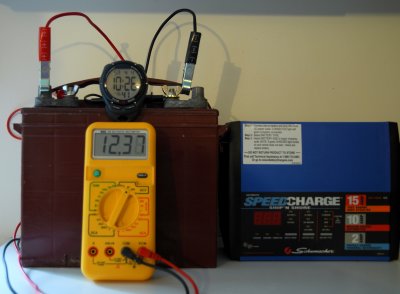 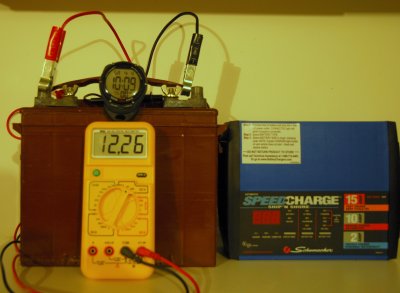 Voltage After Resting 24 Full Hours
Here's the photo after 24 hours rest. The battery is back to just about where I had calculated it would be. I also waited longer and measured it at 34 hours and it was still at 12.26 volts and had obviously reached a steady resting voltage. Temps in the shop were a steady 74F..

Using a digital volt meter (DVM) or even an analog one to measure your batteries state of charge can be quite misleading with some rather wide margins of error unless you let it attain an honest resting voltage. Live loaded voltage readings can be used, to get an approximation, but it really requires some home work on your part in order to learn how to track your bank, at specific loads and what type of voltage you should expect. Most boat owners will never spend the time to go through this exercise..

EDIT 2/13/11: As an update I have since applied many different loads to remove the surface charges or about 6 or seven different batteries, ages and types.. 5 amps, 10 amps 20 amps etc. etc., and all for varying times.

The problem is that none of the surface charge removing loads give me an accurate reading that agrees & matches up with a 24+ hour rest. I suppose you could do some rather lengthy experiments and find the exact load to remove a surface charge, that works for your bank, at a certain state of charge, but this would be complicated at best. The closest I got was within 8-10%. A 10% variance on a 400 Ah bank is 40 Ah's or nearly a days worth of power for us. Having & interpreting my bank, reading the equivalent a whole day off, can be and would be rather frustrating.

TEMPERATURE: I have also experimented at length with resting voltages and temperature. At 95F a battery can come to rest in as little as 12 hours. When cold during the winter this can take 10+ days!! Temperature plays a huge role in when you will achieve a "resting" voltage.

For more information on the efffects of temperature on self discharge see the link below:

Effect of Winter on Self Discharge (LINK)

Measuring the battery state of charge with a DVM can be misleading if not done correctly or with some real in-depth knowledge of your bank. When just 0.1V represents approx 10% of the capacity it is easy to see how resting vs. not resting can trick a user into believing their bank is more full than it really is...
click on thumbnails for full image