Another Photo A Day year enters the archives. 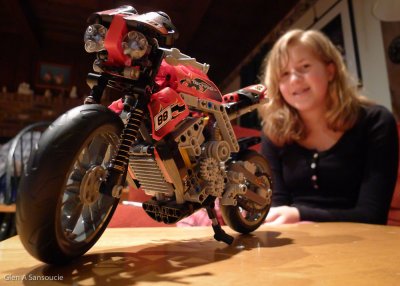 Day 364 - Lego Motorcycle
(1096/365)
My 13-Year-Old & I broke open the Lego Technic Motorcycle kit this evening. There are 467 parts and two very thick manuals. There was a choice of a cruiser or a sport bike. We opted for the sport bike, though I think that was more Dad in the opting department. It took about 2 hours to assemble. All I did was search for the parts in the bags, she did all the work. The few pieces I did assemble, I basically screwed up. Its hard to believe I can disassemble my bikes and reassemble them without any trouble, good thing I don't ride Lego bikes.
Anyway, this bike is pretty cool, we acually built the motor, a three-cylinder (Triumph?) and transmission. There is even a lego chain for the rear wheel. When you roll the bike along, the pistons actually move.
My oldest is across the street on a last minute baby-sitting job, my son fell asleep already, my 13-Year-Old is now playing Zombie Farm on her iPod Touch. I think my wife will be in bed in a bit (she sets the alarm for a few mins before midnight so she can wake up in time for ringing in the new year. I am now on the MBP setting up my 4th year PaD.
Happy New Year!
1 comment leave a comment 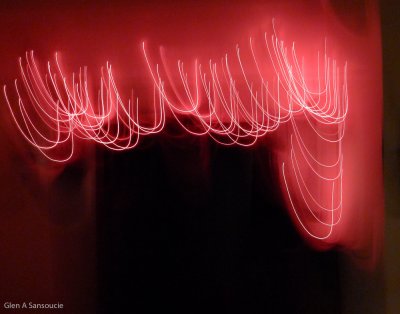 Day 363 - Ethereal
(1095/365)
Just an interesting shot this evening of some Xmas lights that are still up. Slow shutter speed and a wavy hand. At first I was trying to shoot these without any blur, but realized the error in my way.
Feel the blur!
0 comments leave a comment 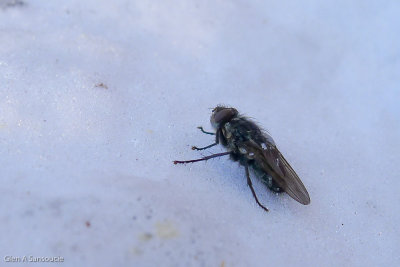 Day 362 - Snow Fly - Don't Bother Me
(1094/365)
Not something we are used to seeing up here in the winter. I almost stepped on him in the AM on the way to the car. I had my camera with me so I tried my best to get as low to the ground (hard to do with a bum foot) and capture him. This shot came out pretty good, it is an almost 100% crop. He is pretty much chillin out here, not moving though.
0 comments leave a comment 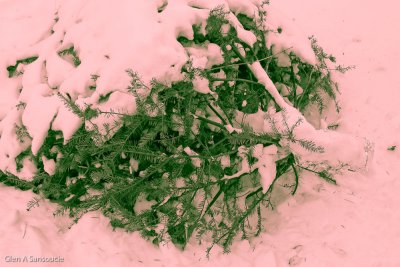 Day 361 - Discarded
(1093/365)
Day after Xmas we pitched the tree because it was so dry, the needles were dropping off of it when we walked around the room. It made it out the door, out of the porch, over the deck and then thrown far enough over the railing to stay our of our way until spring (trailing a carpet of needles).
A little Quad Tone action in LR 3 applied to an in-camera BW Dynamic shot.
0 comments leave a comment 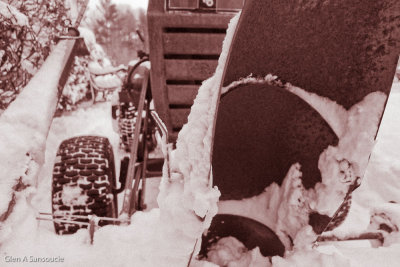 Day 360 - Blizzard Tamer
(1092/365)
Not sure about all the hype, we got about 6" - 8" of snow over here. The battery is dead in the tractor, I had to pull the Tahoe over to jump the tractor. The beast fired up (after a long startup yesterday when getting everything ready) and I was able clear the driveway. There is no room left in the garage so the tractor has to remain outdoors.
This was actually shot BW High Dynamic in camera, then tweaked in LR3, making it into a Tritone but adding red shadows.
0 comments leave a comment 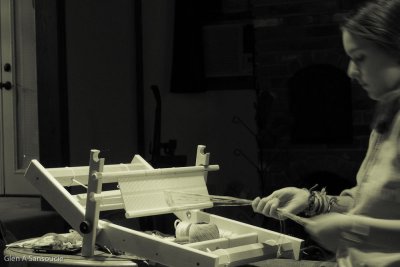 Day 359 - Weaver
(1091/365)
My daughter weaving a hemp belt on her new Emilia 13.5" Rigid Heddle Loom. We braved the blizzard to head down to Portsmouth to pick up some supplies for her. She thought 400' of hemp would be enough, it was.
1 comment leave a comment 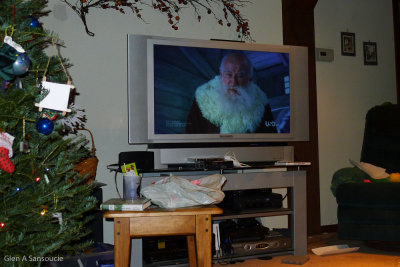 Day 358 - Day got away from me
(1090/365)
Xmas almost got away from me when I realized I'd not taken any photos. A shot from my resting place on the couch watching Elf (which was apparently on all day on one of the channels).
0 comments leave a comment 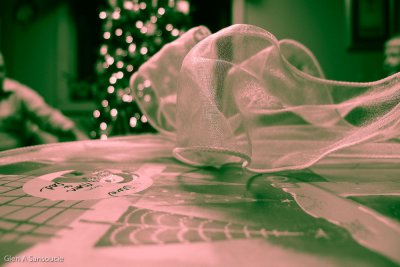 Day 357 - Gifts
(1089/365)
Xmas Eve we always head to my folks for "Grandparents Gifits", when my inlaws are in town, they join us as well. This was my gift, I couldn't resist a closeup of it. It was shot BW in the LX5 (High Dynamic), converted to a Quad-Tone in LR3, adding some Red & Green Highlights/Shadows for cheer.
0 comments leave a comment 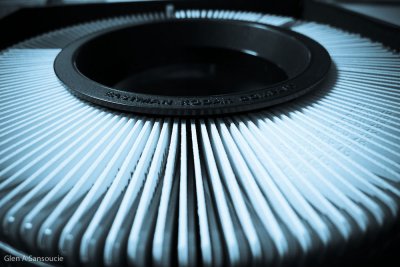 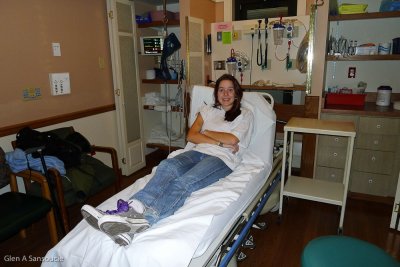 Day 355 - Emergency Room
(1087/365)
I realized around 7PM-ish that I had a little over an hour to kill before I had to go head over to pick up my oldest at her Driver's Ed class. On my way out the door, my wife calls and tells me I had to rush to Driver's Ed because my daughter had fainted and someone called 911. On the road, my wife called me again to tell me my daughter was heading to the Hospital. So I detoured to the Hospital which is actually closer than Driver's Ed, so bonus points there.
My daughter's fine, she just passed out while watching a film where a girl was on her cell phone while driving, looked down for something, and hit a tree. They showed her with skin grafts which was enough for my daughter to pass out.
This is her second ride in an abulance to an emergency room, this time she didn't need 24 stiches, so we are getting better.
After she was all set, we hit the Cafeteria for some supper, actually it was my supper, my daughter wasn't hungry for some reason. Great Lobster Roll!!
0 comments leave a comment 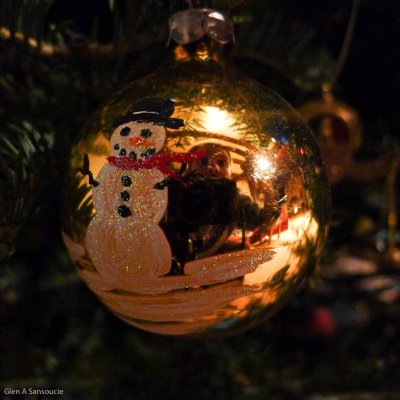 Day 354 - Holiday Cheer
(1086/365)
Just a little Seasonal Photo Op. From the looks of this in LR, this ornament is a classic. It's got a few scratches.
I am lying on the couch trying to recoupe from a full day of no cane, my whole leg is sore from having to walk a different way, I can't bend my foot at all which puts a strain on the whole leg apparently.
1 comment leave a comment

Day 353 - Winter Concert
(1085/365)
First day back to work, as I was leaving to make my daughter's concert (concert #3 for the family this season), I realized it was snowing out. Travel wa a little slower than normal. It was nice to have my first drive home (in a four-wheeled vehicle) in the snow, I wasn't regretting not riding (not that I could ride yet).
My daughter is playing Trumpet, third row back, second over from the left.
1 comment leave a comment