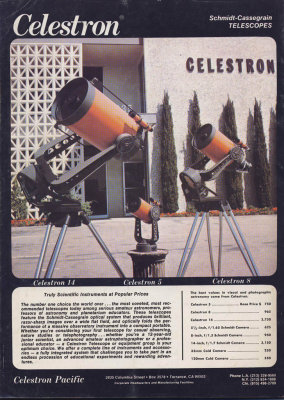 Aperture fever
As I soon came to realise, a classical refractor, with it's high magnification and ravishing good looks, was not going to give me the best views of deep space objects - my avowed passion at the time. Aperture became king. To rationalise a new purchase, I soaked up glossy adds in S&T for the relatively new (in amateur circles at least) Schmidt-Cassegrain design. Not only did it have aperture, but it was compact - an important feature since I lived in an apartment at the time. I needed portability. I could easily set one up on my balcony three storeys up! It was decided then. I would trade in my Unitron and buy an 8" Celestron for a mere $AU850! 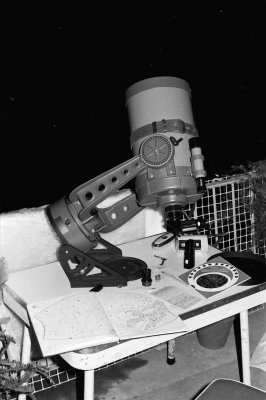 A compact scope at last
After another visit to my favourite shop in 1975, now called Astro-Optical Supply Company, I handed over a cheque for $850 and my old Unitron and came home with my beautiful new scope. Here it is tabletop mounted on the balcony of our apartment looking for anything in the floodlit northern sky! 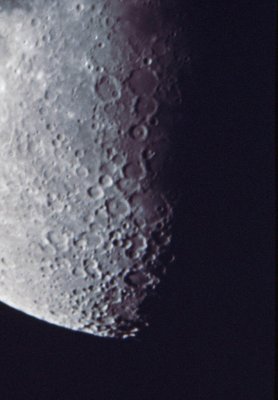 First Prime Focus Image
With an adaptor machined by my dad I was able to attach my Minolta SRT-101 at the prime focus. I took a few pictures of the moon that were quite stunning at the time 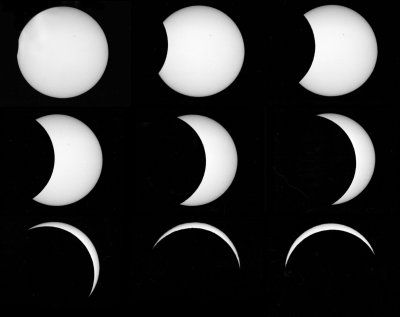 Partial Solar Eclipse
From Sydney, the total solar eclipse of 23 October 1976 appeared as a 94% partial eclipse. Unfortunately I didn't have the means to get down to Melbourne to see totality but I made the most of it by taking a sequence from a friend's backyard. Even at 94% the sky got darker and the birds began to roost - quite eerie! 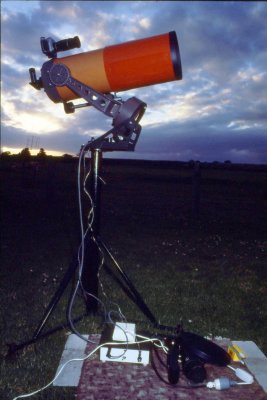 My Second Telescope In the Field
My uncle owned a farm up near Taree NSW, so once I had a car I was able to take my scope into some pretty dark skies. Here it is in the field after the addition of a steel pier (built by my dad) and a tube counterweight. All ready for a nights observing in the country! 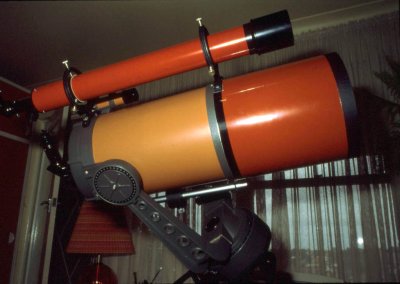 My Astrophotography outfit
After adding a guidescope (wishfull thinking) it didn't take long to realise that deep space astrophotography was not easy! How do you polar align?! How do you guide well enough to show more than blurred streaks?! How do you focus?! Unfortunately I was never able to solve these problems as my University studies left me with no money or time. 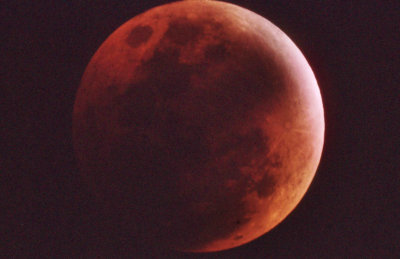 A lunar Eclipse
I continued to use my C8 intermittantly throughout the late 70s and early 80s, capturing a lunar eclipse outside the Macquarie University Observatory in 1979.
I got married in 1984 and from then on my astronomy hobby went into hiatus. I sold my C8 in 1987 to help fund a new car ... a sad day :-( 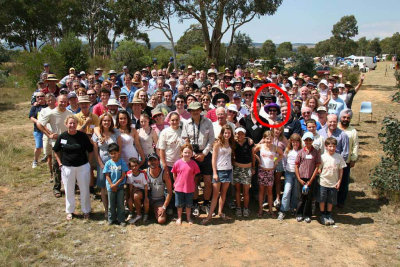 The Reawakening!
In 2005, while my (2nd) wife Gail and I attended our first star party (the South Pacific Star Party near Ilford, NSW), my passion was reignited. We wandered around the fields and looked at and through many scopes. My wife enjoyed it so much she began to understand why I was so interested in restarting my old hobby. At the end of the star party she basically told me "just buy what you want ... you've worked hard for what you have and you can't take it with you." Thanks to that complete approval, I did just that :-) 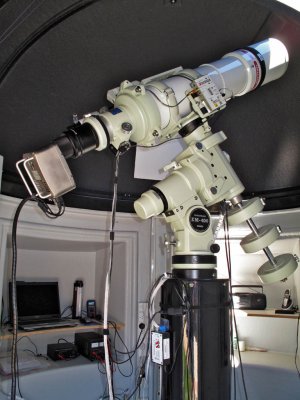