This blog is a way of sharing some of the things we see and are working on at the Fletcher Wildlife Garden (FWG). Contributions of photos taken at the FWG and information about them are welcome. Please send them to fletcher@ofnc. Be sure to provide the full name of the photographer and permission to use the photo on our blog. 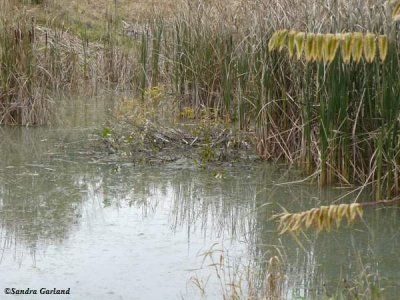 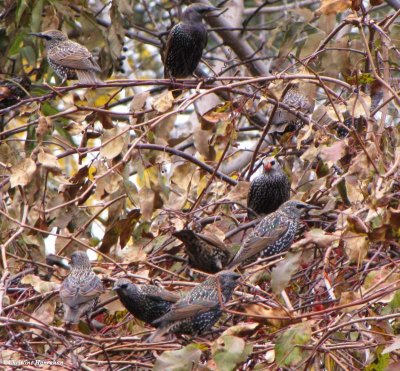 Starlings feeding on crabapples
There were hundreds of starlings around this morning at the garden, flocks of perhaps 150 or more. They didn't stay in any one tree for long, but long enough in this crabapple for me to get a few shots. As you can see, they are all in their spangly winter coats!

The usual birds were around the garden, but in addition to the robins, cardinals, chickadees, etc. there were about a dozen red-winged blackbirds in the cattails in the pond. Most of them appeared to be juvenile males. 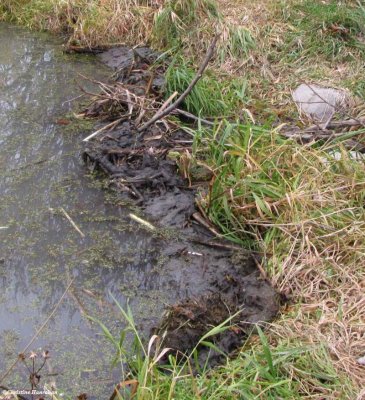 Beaver dam
Another view of the small dam.
0 comments leave a comment 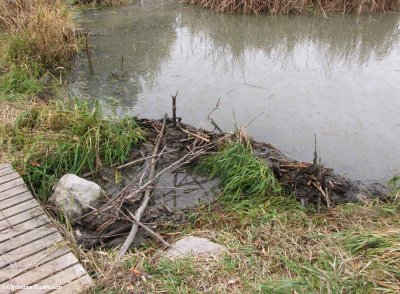 Beaver dam
To the right of the bridge you can see a small freshly made beaver dam, courtesy of a beaver who has recently taken up residence in the pond. Although we've had beaver there before, never has one been as industrious as this one.
1 comment leave a comment 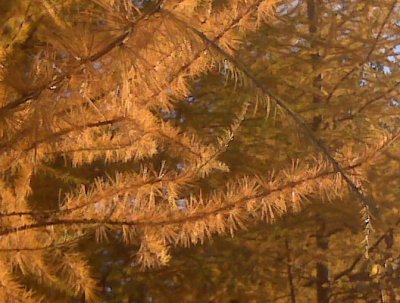 Tamaracks
These photos of tamarack trees (Larix laricina, also called larch) at the FWG were contributed by Hélčne (the photographer) and Bryan Halliday, who were taken with the beauty of these trees, and sent us the photos to confirm ID. Although classified as conifers because they produce cones, these trees turn gold in fall and lose all their needles - so they're deciduous conifers.
0 comments leave a comment 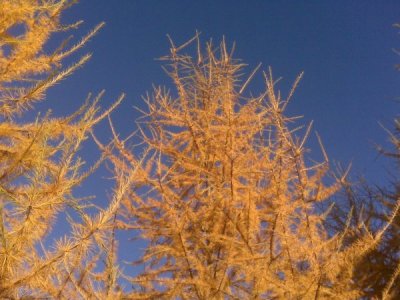 Tamarack
The fall colour looks particularly spectacular against our rare blue skies. These trees prefer a damp habitat. At the FWG they are growing in the wet field north of our Ash Woodlot along with a number of Red Osier Dogwood shrubs. Watch these trees again in spring when the cones start to form, as they look like they are blooming with small dark red flowers.
0 comments leave a comment 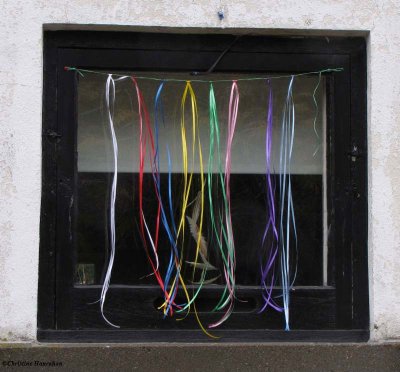 Ribbons for birds
A little while ago, a volunteer found a dead white-throated sparrow. Because it had no marks on it, as if attacked by a predator, and because it was near the building, I concluded it had struck the window. This illustrates the problems that even small windows can present for birds who see the reflection of trees, sky, etc, and think they can fly through. Sandy and I discussed this and I suggested ribbons outside the window, because the best thing to do is to break up the reflection by having something moving across the window surface. In the past I had hung used CDs in the windows, but some viewed them as very un-aesthetic and I guess they were! Sandy bought the ribbons, and Erma, Isabelle and Barbara devised the design and installed them on every window and they look great! Very festive.
0 comments leave a comment 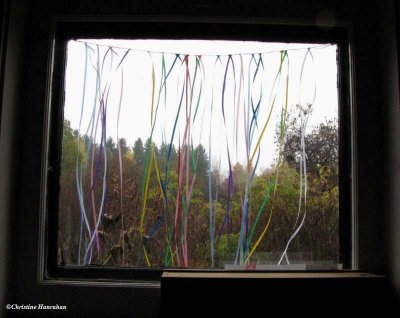 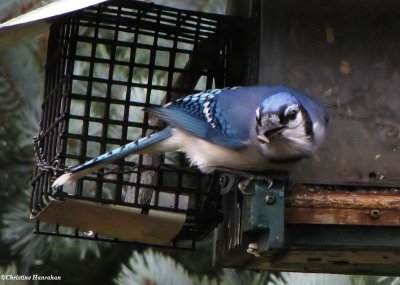 Blue Jay
I don't usually go to the FWG on the weekend, mostly because I like going further afield, but having things to do closer to home, I decided to pop in for a few hours. I'm glad I did. There were lots of birds around, especially before the rain started. This blue jay was greedily grabbing the sunflower seeds. Meanwhile, many chickadees were darting in, sometimes 3 or 4 at a time, to grab seeds. A flock of juncos were underneath the feeder, cardinals in the serviceberry tree, a raven flying around overhead, and hundreds of starlings just below the BYG.

Also of note, was a beaver in the Amphibian pond! Haven't seen one there for awhile. When first spotted, he was sitting on a pile of cattails, and it looked like he was gnawing away at the cattails. Once he became aware of me, he swam off to the open area near the bridge. I walked around the top of the pond (south side) hoping for a photo, but the darn cattails made it impossible to get a clear shot. I doubt this poor guy will stay. It is no place for a beaver to spend the winter, though judging from some of the work he has done, he thinks he may have found his new home. 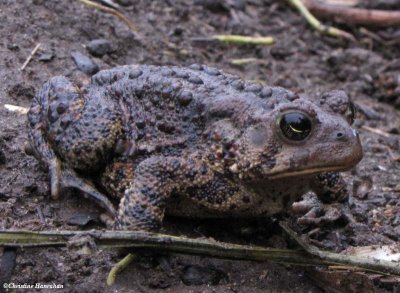 American toad (Bufo americanus)
While watching the juncos hopping around on the ground beneath the feeder, I caught a glimpse of an odd movement, odd that is, in amongst the nimble juncos. Going for a closer look I discovered this toad. I picked him up and moved him a little further under the shrubs, and he was icy cold. Most amphibians, but not all by any means, have sought out overwintering sites. These guys don't produce the anti-freeze in their bodies like woodfrogs do, and they need to find a hibernation site well below the level of ground freezing.
0 comments leave a comment 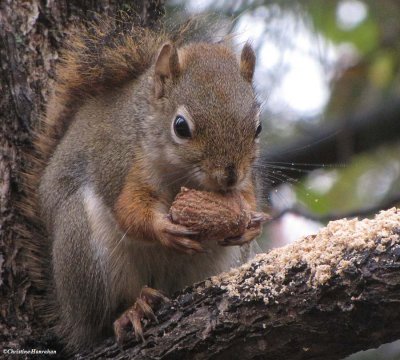 Red squirrel with walnut
As is always the case once winter approaches, red squirrels become more visible. This one was sitting in a walnut tree gnawing away at a nut...you can see the pile of debris on the branch from its efforts!

Speaking of mammals, I checked one of the nest boxes in which mice had built a nest entirely of dog-strangling vine early in the spring. It is now a big nest and when I opened the front, FIVE little guys clung to the inside top of the box, all in a row. Talk about cute!!! Too dark for a photo, and besides I was worried about disturbing them, so I left them alone. 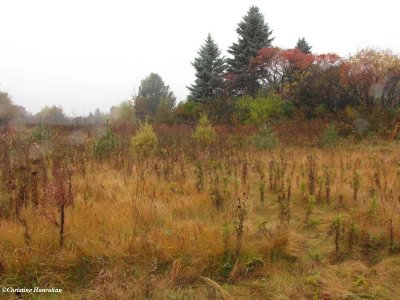 Old Field
It began raining quite hard as I approached old field and my next set of photos are a bit smudged, thanks to the rain drops on the lens. There was a faint mist, just enough to soften things, and the landscape around the garden was quite beautiful.
0 comments leave a comment