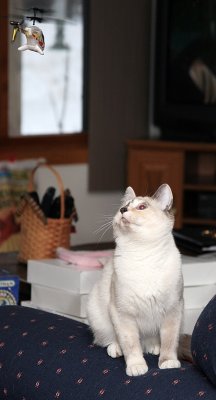 Beware of low flying aircraft
Do yourself a favor and get one of these remote controlled helicopters. The big boys will be happy, the little boys will be happy and it amuses the cat. Seriously, it will be the best 20 bucks you ever spent.
So this is how Zoey spent her first Christmas. I think she had a blast. See you all next year!
13 comments leave a comment 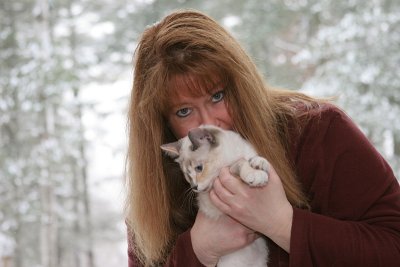 Happy Mew Year!
Okay, thats corny but you knew it was coming right?!!?
When I first started this blog all I really wanted to do was keep friends & family updated on Zoeys progress. No one was more surprised than me when her story started attracting thousands of viewers and generating all the support and comments it has. As of tonight we are at 116,500 hits. I really hope that Zoey will continue to inspire others to consider helping/adopting special needs animals or the ones that may not get a second look. Perhaps even supporting local rescue and shelter groups. There are lots of ways to help even if you can't actually adopt a pet.
As with all good things they do need to come to an end, sort of. I mean really how many cat pictures can you stand to look at?!? We can still post every now and again, but not nearly as much as we were. Wildlife photography is my passion and winter eagle watching is starting. And I think Zoey is getting sick of me always pointing "that thing" at her. If it looks like I have a death grip on her in this shot, I do! Ask my friend Fisher who photographed us, Zoey wanted no part of it!
So to all of you who took the time to read our story, share it with others and share your thoughts, Thank you so very very much. We appreciate that more than you can know. All the very best to you in '08.
27 comments leave a comment
*** The Power of Purr ***
*February '08 *
Something awesome is going on out there. Since we last posted a month ago, I have received many messages about how much Zoey has inspired some of you. You wrote about donations and helping out local organizations in caring for strays and animals with physical challenges. Its overwhelming to me that one little purr has been heard around the world, literally!
You CAN make a difference!
Read here about Misty: http://www.pbase.com/ntebrd/misty
A stray kitten who started off life by riding the trains in Brooklyn, only to be injured and now physically challenged. Truly another story of the will to survive.
3 comments leave a comment 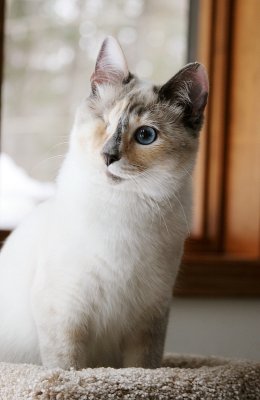 It's A Zoey-ful Life
Just thought we'd drop in and say hi! Its still amazing that we are getting hits every week and requests on updates and more pictures. I have decided to try and post once a month until we get to the year anniversary of us finding each other.
Zoey has settled into a pretty comfortable life. And even though she is the littlest one, she rules the roost here.
She is still being Zoey by walking on the counter (the water bottle thing seems to be a game now) and she still picks on poor Ozzy. She likes watching birds and squirrels out the window and at night she sleeps right above my head on the pillow. Right now she is curled up on my lap where she often is when I am on the computer.
We have broken the 150,000 mark for views on her gallery, it is in fact right now at 151,015.
So thanks for stopping by we'll see you soon!
23 comments leave a comment 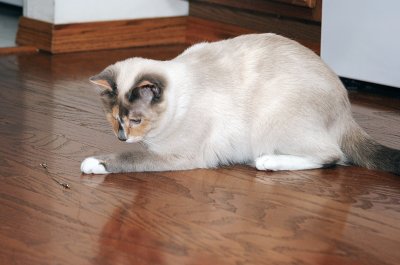 Cat Fishin'
Zoey and the kitty crew recently enjoyed a little "fishing". There was a little snap (no hook of course!) on the end of the fishing line. They chased that thing all around the house. As you can see Zoeys colors have really developed. At times her backside almost has a dirty look to it! I'm surprised at how big she looks on this shot. I think it might be the way she is sitting. She is still quite small, much smaller than the other two.
And speaking of size, check out that boy Oz:
pbase.com/douroc2/image/96361550
Thanks to our friend Ed for helping with the title of this entry!
3 comments leave a comment 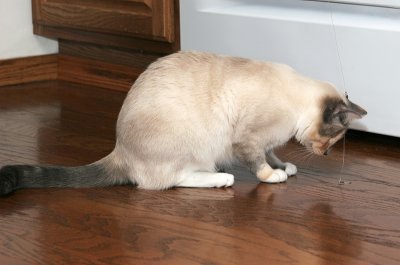 The Stare Down ~ I can wait all day
If I stare at you long enough, you might move.
If you move, I WILL chase you.
If I chase you all will be well in my world!
Yep, its all good here!
This one especially for mit. Thanks for checking in on us mit!
10 comments leave a comment 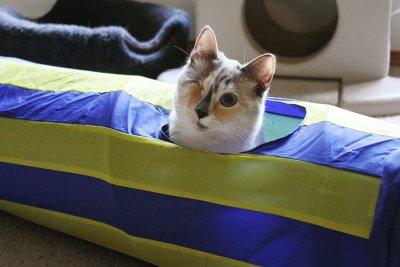 Pop Goes the Zoey
My sissy Kris gave the kitty crew one of those tube things for them to play in. Its open on both ends and there are 2 openings on the side. Zoey and Lucy spend alot of time chasing each other through it and Zoey likes to pop out the holes on the side. Its pretty funny when they end up scaring each other. Zoey will also hide in there and just swat her paws through the open holes. She has drawn blood on us on more than one occassion.
5 comments leave a comment 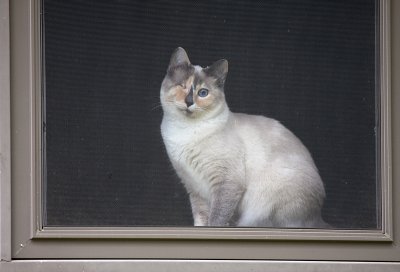 Watching birds is Zoe much fun!
Having only one eye has not hampered Zoeys ability to see the birds and other small critters that run around the yard. This is one of her favorite things to do. Sit in the window and watch what is going on out there. I would say she sees just as well as the 2 eyed cats that live with her. She can sure give them a run for their catnip!
Its hard to believe it is coming up on a whole year that Zoey has been with us. It sure went fast and it sure has made things pretty interesting to say the least.
Life is good in Zoey Land!
10 comments leave a comment